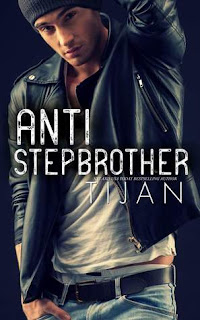 I think by now you all know how I feel by Tijan's books: they rock my world! There has not been one single
book by her yet that I did not love (and I have read a lot of them!).

Anti-stepbrother was no different.
My favorite thing about the book was how the main characters friendship blossomed into something else as the story progressed, it made it all a lot more believable and relatable.

Another reviewer used this quote and I had to steal is 'cause it describes their relationship perfectly:
LOVE IS FRIENDSHIP THAT HAS CAUGHT FIRE. ~Ann Landers

While trying to escape the whole thing she bumps into Caden, he is in her brother's fraternity house and isn't all that pleasant to be around. But, a couple of rides later they became really good friends!
Caden also has a reputation around campus and as she falls for him she knows he would never date a freshman girl, he would never date her.

Summer was hilarious! She speaks what is in her mind even if it is the weirdest thing ever, it made her character fun and sweet. The girl was also a tad aloof, she always ended up being left behind somewhere, which was how Caden ended up taking her to places or home so often. I adored her quirky habits.
Caden was loyal and reliable. Yah he perhaps had some anger issues but never without a reason. And the more we got to know him the more we understood him. The guy has been through a lot.

As per usual all secondary characters were a delight to read.

There was this little thing at the end I didn't really love. I felt Caden did, with the best of intentions, the wrong thing. It didn't sit well with me and it was a little silly, I didn't find it very realistic. So I guess that is why the 4.5 and not 5... (go all the way to end to read what I am referring too- there will be spoilers)

All in all another masterpiece of a book by the fabulous Tijan!


Spoilers: So towards the end Summer has a breakdown, it is about her mother's death. That is ok, and very believable. Many of us suppress feelings like that instead of dealing with them straight away and it does often come back to bite us. What I didn't like was that Caden left her at this point. He had good intentions, he left so she could heal and not use him and how he made her feel to heal. But I didn't like that at all. I found it a little silly, there were other ways he could have helped her without leaving. In the end it helper her but also harmed her... so yah... I wasn't a fun of that.