June 12, 2018
I am finally back home from BookCon. It was crazy and I am dead tired.
Did I love it? YeS!
But will I go again? That is the current million dollar question. Not everything about BookCon is rainbows and roses, so sadly, that is not an easy question to answer.

As you can see I met some amazing authors at BookCon. That was definitely one of the highlights of BookCon for me. All the authors were very friendly and kind towards their fans.

BookCon has an autographing area that is ticketed prior to the event. I got tickets to see Kendare Blake and Renee Ahdieh. I liked the ticket system because it meant you would for sure meet the author you were waiting in line for. The downside? You had to buy a book in order to get your own signed. That was ok for Reneeh Ahdieh as her latest book (Smoke in the Sun) was days from being released and she had copies for sale. That was not ok for Kendare Blake. The only books she had were Three Dark Crowns and One Dark Throne and since they were no longer new releases I already had them both, I didn't really want to have to buy an extra copy.
So, yah... autographing area was good, but if we have to buy books for it a larger selection of books from the authors would have been nice. That was an issue with many of the authors.
Needless to say, the amount of tickets was limited so tickets got sold fast. By the time I went online all big authors were already gone. Luckily for me Renee was the only one I really wanted.

There were also some authors signing books at event booths on a first come first served basis. That was in many cases horrible.
I met four authors like that: Kerri Maniscalco, Natalie Parker, Sarah Morgan, and Naomi Novik.
Sarah Morgan, being a romance writer and not as well known as the others had an easy and calm waiting line. No stress whatsoever. She was super nice, the staff was very friendly, and the people in line were very respectful.
The same cannot be said about the other 3 signings or any other signing for a popular author.
Here is more or less how it went: publishers only had a certain amount of books that this authors would sign, they announced the time those would happen. People would flock to their booth one hour or more before that time and start lining up. Than the ridiculous would start: the staff from said booths would come out and say there was no official line/queue, which meant people had been there for over one hour with no certainty they would get to meet the author whatsoever. About half hour before a member of staff would come out and start a line -often NOT were people were lining up-. The problem with that? well, simple: everyone would run towards that member of staff at the same time. It is surprising to me not more people got injured at this event. Naomi Novak one was the worst! Some members of staff pointed to a location to form a line, people did. Than they proceeded to say there was no official line. When the member of staff came out with the numbered tickets there was much pushing and pulling. I don't even know how that person stayed on their own two feet. There was literally about 100 people on top of her. It was ridiculous.
BookCon is an injury lawsuit waiting to happen.

There were many arc drops and giveaways. Also injury lawsuits waiting to happen... By midday the second day I was avoiding those like the plague. Whatever I got free was by luck. I refused to participate in the madness. I tried once more later in the day and regretted it. I mean, it got so bad  the security guards came over...

And you know the saddest part? The event was not even over and there were already arcs on sale online. People pushed and pulled and run like mad to get arcs just to sell them later.
I had a member of staff at penguin laugh at me at one point because I was actually reading the blurb of an arc drop before taking it with me. It occurs to me now I was probably the only one who did that. Many people were there just to get free stuff and sell later, that left a bitter taste on my mouth. 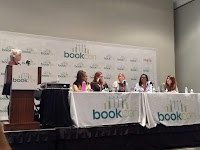 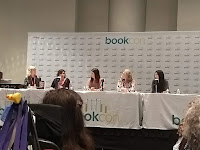 Panels were awesome. I didn't manage to go to many, but the few I did go to were great fun. I love hearing about how the authors process and develop their works and it was a treat to get to see so many of them in one place. The panel 'Bringing real life into fantasy' with Laini Taylor, Jeff Giles, Danielle Paige and AC Gaughen was probably the funnest. Jeff Giles is hilarious, I must read a book by him now!

The best part of BookCon and the one thing that made it all worth it? Meeting fellow Bookstagrammers! I got to meet some of the bookstagrammers I have been in contact with and we had a blast. We did some sightseeing together in New York, chatted, laughed, complained about queues... hehe

All in all, fabulous event, great opportunities, but an event that still needs some tweaking.
Your feet will hurt, your back will hurt, you will not get all the arcs you want, and you will be pushed and shoved at least once.
BUT, you will also meet some amazing people, some fabulous authors, and get some pretty cool swag!

So...will I go again? Maybe if my support system (aka my bookstagram besties) go too! :)
No dice otherwise.