September 05, 2018
Today is a bitter sweet day... I couldn't wait for this book, and now that I have finished reading it I am undoubtedly sad it is over. It was an awesome ride!
Ruby, Arcus, and Kai together with the secondary characters were all amazing and it is sad this is the end of their journey. Kai deserves a story of his own for sure. This series has a special place in my heart and will definitely be worth a reread someday.
Blurb: 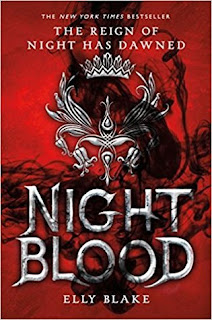 Ruby's world has changed more than she ever could have imagined. She's in love with a powerful Frost King. She's the heir to the Fire Throne. And she may be a Nightblood--the spawn of a vengeful deity hellbent on releasing his wraithlike Minax from their prison. Once freed, these beasts will roam the earth, devouring every last person until he or she is nothing but an empty husk. But Ruby is able to control the Minax to a degree, and now she, her beloved Arcus, and her friend Kai must find a way to bring Frostbloods and Firebloods--sworn enemies--together to make a stand against a foe more deadly than any they've faced.

Let's start with my favorite part: Ruby and Arcus!
They have both grown so much since the first book and their relationship is so solid now. They deserved a happy ending after everything they went through.
It was wonderful to be part of their getting to know each other better, learn to give each other space, help each other in time of need, learn to control their jealousness, and learn to trust each other fully... They have come along way from the first book.

Nightblood is no doubt the most stressful book in the series. Ruby fights to control herself and the Mina'x dark influence the whole way through. Most of the time she succeeds, but not always. Although Ruby's character starts off in Frostblood as just another 'Mary-sue' type, there is much more to her character. In the end, she felt real. When she finally gave in to the Minax I can honestly say in her shoes most of us would have done that too.

Arcus was a swoon worthy as ever. That man is rigid and serious as most frostbloods, but every time he lets as see a glimpse of his feelings its impossible not to fall in love with him more and more. I felt like screaming into the book 'We feel yah Ruby!' hehe
All he wants to do is to see Ruby safe and at the same time keep his people safe, he wants to be a good king.
I feel on the fence about his ending, I am not a fan of authors that do what Elly Blake did here (you can ask me if you want to know, otherwise is a big spoiler). But at the same time I kind of understand why it was needed...

Kai is wonderful and I appreciate his character a lot. That being said, there were times he made things very difficult for Ruby. He was trying to help her, but often his playful personality caused issues between Arcus and her. I would love nothing more than a book for him. He deserves a happy ending too. He was loyal and brought us a smile from beginning to end.

Overall a great series and my heart is in true pain as I write these final words... as much as I wanted to read the last book it feels horrible having to say goodbye to these amazing characters.