August 19, 2018
This is my favorite work by Juliette Cross so far. Dommiel was a hard demon not to fall in love with...
Are you looking for a great paranormal romance? You have found it!
Darkest Heart may be a romance story, but it is also a lot more than that. It is a story of redemption and forgiveness. We all make mistakes, and we can all bounce back. In this case, starting with our demon Dommiel. 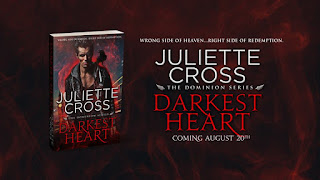 Dommiel is considered a traitor to both kinds, a fallen angel, and a traitor to demons. He has a very dark view on life and a cocky know it all attitude to go with it.
Then he is pared with miss goody two-shoes in a mission to find a missing angel. It was hilarious and heart warming at once. He is a traitor, he acts as if he cares for nothing. And yet, no one better dare touch 'his' sweet angel.
And as Anya gets to know him, so do we. It soon becomes very clear there is more to Dommiel than first meet the eye, things are not black and white and Dommiel falls very much in the 'grey' category of things...
Anya is a walking contradiction, she is both one of the most sweet and innocent characters I have read in a while and a fierce warrior no one should cross. And just when you are about to roll your eyes and go 'another perfect little girl' protagonist she does something that will shock you. It shocked her too. Dommiel was the only one to think it natural! LOL

Their romance was slow burning, there was an immediate attraction for sure but they both had their reasons to at least try to keep away.
The plot was also very well written, there was a natural flow to it. I wish I had read her other series before hand because some of the secondary characters clearly have a history. That being said I didn't feel like I missed anything, there was enough on them to make the story complete, it just made me want to know more. Which I suppose if you are trying to sell your books is not a bad thing at all!

Last but not least I loved how all Dommiel physical flows were written in such a positive light. He was not depressed because he was missing an eye, or angry because his hand was not a human hand. He just was. He made no excuses for it, had no shame because of it. I thought that was awesome! It doesn't bloody matter how he looked, he was imperfectly perfect.

Find the book at: AMAZON - BARNES AND NOBLE - GOODREADS