For the Book Blurb: Cole

Maaaaaaaan.... This was so good! I am officially hooked on Tijan's books. Cole was the third book I read by her and I have already started on the next one.

Although this book is not necessarily part of a series, I strongly believe you should read Carter Reed and Carter Reed II before reading Cole (I have short reviews for both books on my July wrap-up). I honestly do not believe I would have loved it as much I have had I gone into Cole blind. We learn nothing of him the first half of the book, he is just the mysterious guy that never speaks of his life. That was only ok for me because although the female character in the book, Addison, didn't know anything about him, I the reader did! I understood his secrecy, I understood his fears, I knew from the very beginning (even though it was not said in the book till much later) all that was going on with him that she didn't know. It made relating with him as easy as it was with her. I think it would have been very very hard to relate to him without knowing anything about him. So, if you trust my opinion at all, go read the Carter books prior to this. And if you love New Adult Romance, trust me, you will love all these books.

Addison was such an interesting character. She has been through hell and back and the author did not shy away from her brokenness. It was rather refreshing reading an NA novel treating grief with some form of respect. So many NA novels are all about the passion between the main characters and nothing else. Addison saw her husband die in a car crush and a year later is still trying to move on. When her friend tells her there is an opening at an exclusive apartment in town she reluctantly goes to check it out, loves it and moves in. Than her path crosses with her neighbor...mysterious, handsome, dangerous!

Cole was awesome! Some reviews I've read had complained his character was undeveloped. Well... back to my first paragraph: read Carter! Cole doesn't appear 'that' much there, but enough (Carter Reed II mainly) to give you a solid background on him. It was fabulous getting to know him better. In Carter Reed II he has a much lighter mood. He is fun as well as dangerous and powerful. In Cole, for the grand part he is mysterious and dark, and when with Addison, loving and kind. There were so many layers to his personalty. I truly enjoyed his character! 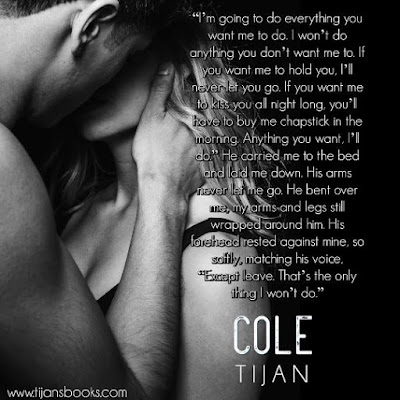