The Problem with Forever by Jennifer L Armentrout - 5+/5 stars 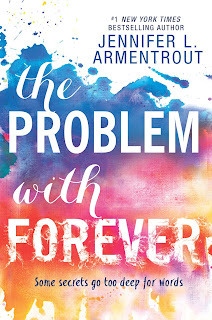 This was a rather emotional read for me. I usually write a review immediately after I finish a book, I needed to give this a day.
The most striking thing about it? How real it was. Anyone that says this book was not in touch with reality has clearly no understanding of what Mallory has experienced (or thinks their problems are the only real ones, sadly that does happen a lot).

The blurb:
For some people, silence is a weapon. For Mallory “Mouse” Dodge, it’s a shield. Growing up, she learned that the best way to survive was to say nothing. And even though it’s been four years since her nightmare ended, she’s beginning to worry that the fear that holds her back will last a lifetime.Now, after years of homeschooling with loving adoptive parents, Mallory must face a new milestone—spending her senior year at public high school. But of all the terrifying and exhilarating scenarios she’s imagined, there’s one she never dreamed of—that she’d run into Rider Stark, the friend and protector she hasn’t seen since childhood, on her very first day.

It doesn’t take long for Mallory to realize that the connection she shared with Rider never really faded. Yet the deeper their bond grows, the more it becomes apparent that she’s not the only one grappling with the lingering scars from the past. And as she watches Rider’s life spiral out of control, Mallory faces a choice between staying silent and speaking out—for the people she loves, the life she wants, and the truths that need to be heard.

Mallory was, needless to say, perfection. She is shy, trained by the events in her past to not say anything. She knows talking has consequences and so she struggles to even say her name. I know it can sound to many a rather unrealistic thing, but it isn't. I can vouch for that, though we will not go into that here.
She is sweet, brave in her own way and I LOVED reading her progress. It was a short book, and yet, it felt like I read someone's lifetime in it. Malory grew and changed so much in just a few hundred pages and in such a real, raw, emotional way. A masterpiece from Jennifer Armentrout.

Rider was just as perfectly written. His strength and bravery for others while not having much believe in himself is such a real thing. He did the most adorable things to help Malory heal while not once really taking care of himself. It was beautiful as it was devastating.

The relationship between them was also perfect. It moved at the right speed and in the right way. There is no 'instant love' but there is, and rightly so, an instant connection. They grew up together, 10 years under the same roof, suffering the same ordeals, relying on each other for everything. It makes sense they would connect and feel deeply for each other. The way their relationship evolved was really beautiful.

I cannot praise this book enough.