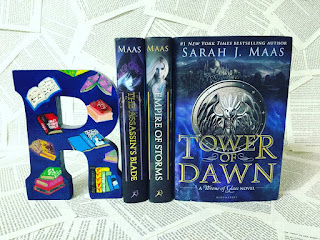 The book blurb as found in GoodReads:
Chaol Westfall has always defined himself by his unwavering loyalty, his strength, and his position as the Captain of the Guard. But all of that has changed since the glass castle shattered, since his men were slaughtered, since the King of Adarlan spared him from a killing blow, but left his body broken.His only shot at recovery lies with the legendary healers of the Torre Cesme in Antica—the stronghold of the southern continent's mighty empire. And with war looming over Dorian and Aelin back home, their survival might lie with Chaol and Nesryn convincing its rulers to ally with them.But what they discover in Antica will change them both—and be more vital to saving Erilea than they could have imagined.

I love how the blurb make it sounds like the book is all about Chaol. Here is a secret: it is so much more! The new characters are brilliant, every single one of them was well thought and well written.
The events here happen parallel to Empire of Storms, the books go hand-in-hand. The happenings in EoS were very cleverly revealed here to Chaol and Nesryn through out the story.

The two main story-lines evolve around Chaol and Nesryn, but not as you would think.
First we have Chaol, who is suffering from PTSD. He blames himself for everything. Not just what happened to Dorian. And he truly believes he deserves the situation he is in. It was good for me to read this. I hold a big grudge against Maas for not dealing well with Tamlin's PTSD in the acotar series. I absolutely hate what she did (or did not do I suppose) for him in those books. So to see how well she dealt with Chaol's here was rather refreshing. I've been told and read that part of the fandom is complaining about how she dealt with Chaol's disability, I think she did a magnificent job. Perhaps it is not perfect, but it is a fantasy book guys... It will never be perfect. PTSD certainly doesn't disappear that fast either. Yet, it was beautifully written, with respect and care. And that is what matters most.

Than we have Nesryn, who with Chaol is trying to understand and 'get a feel' for the court they find themselves in. Its current ruler, the Great Khagan, has 6 children, all very interesting characters on their own right. I find that the book, through Khagan's family, puts great emphasis on what holds a family together, on family values and love. They have a rather terrible tradition when it comes to choosing an heir and what happens to the siblings not chosen, but as the story progresses you can see that these siblings perhaps love each other too much for that.
Nesryn manages to get close to one of the siblings, and her story progresses not at the court but out with him and those loyal to him. While Chaol is healing and trying to understand better the great dark power that struck him, Nesryn is learning how that power come to be.

I don't think I can say much else without spoilers, so I will end by telling you why although I loved the book I cannot in good conscience give it a 5 start rating: the beginning was boring. VERY boring. It took a few chapters for the story to pick up and get interesting to me. Once it did all bets were off, it was amazing... almost perfection!