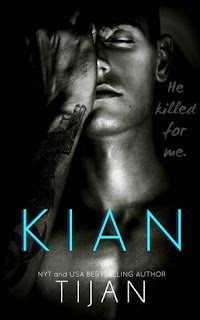 For the book blurb: Kian

First off, the book cover---> It is so freaking gorgeous! Especially after you read the book. It has Kian down perfectly. The handsome gorgeous man and the tormented look... very very accurate.


This is the 4th book I read by Tijan and she did not disappoint. It wasn't perhaps as good as the other three, but it still had a fantastic story and had my attention from beginning to end.

That tiny little sentence on the book cover has the main plot down: "He killed for me". Kian went to prison after killing Jo's foster father. The book begins just a little before he gets released early from prison. Jo is in hiding, after being persecuted by the media an FBI agent (who becomes something of a father figure to her) helps her hide. But with Kian out, the media is in search of her again.
He is the single most caring male character in a NA book I've read in quite sometime. He may be a killer now, but he has one big heart.
Although the book is called Kian, it is for the most part not really about him, but about Jo. I am not sure if that is a plus or a negative. I enjoyed her story, even resonated with her, but not as much as Tijan's other female characters. Sadly Jo did come across a tad silly and childish at times.
Kian was pure perfection. There was absolutely nothing wrong and there is nothing negative to be said about his character. He is loyal, caring, and loving. He also has one very heavy and guilty conscience. Jo needed him, would have died without him. But he needs her too. And a lot.

The one major negative for me was all the 'girl drama'. I can handle some of that. Tijan has had some of that on all the books I've read, but they have all been minimal. In Kian though it is in full force. I would happily have removed the whole freaking section. It was too much. Too cheesy. Too bitchy. Too unrealistic. And I therefore cannot give it a higher scoring than 4.
Either way, great romance read! So.... Go Read!