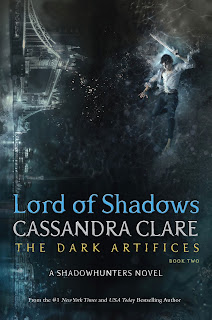 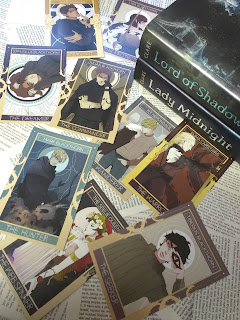 Just another Shadowhunter story...
For the book blurb:
Lord of Shadows GoodReads

I truly enjoy most Cassandra Clare stories, but I think I am, overall, getting a little tired of their predictability.
Don't get me wrong, I enjoyed the book. But there was a lot about it that I could have done without. It also dragged... and I very seldom can stand books that do that.

Lord of Shadows cannot, in my personal opinion be compared to Lady Midnight. LM was a much better book as a whole. The story moved a good paced, nothing felt forced. The same cannot be said about LoS.

The good things:
- Alec and Magnus give an appearance. One can never have enough of Alec and Magnus.
- Great family dynamics! I loved reading about the Blackthorn siblings in LM and even more here. Without them this book would have been a complete flop. The Blackthorn siblings make this readable and interesting.
- Kieran's character, who I hated in the first book has grown on me a lot. He is rather wise and wonderful. I would happily keep him. I adore his softer side. I adore his angst. He is so true to who his is. I wish more people in the world were like that.
- Kit! Loved him in LM and loved him here. It is rather refreshing reading about a character that sees the shadowhunters for what they truly are (more often than not, arrogant selfish bigots!)  He doesn't sing them praises and does not truly hates them either. There is a lot of honesty on Kit's point of view, and I loved him for it.
- Ty! My heart goes for the boy. He is utterly adorable. The friendship that develops between him and Kit is beautiful. It was written well and I genuinely hope they become parabotais in the next book.
- Gwyn! Loved Loved Loved him! I already liked him in LM ('cause I'm weird like that) but now I like him even more. I have a soft spot for misunderstood characters or characters with many sides to themselves. Gwyn is the Leader of the Wild Hunt, he is not someone you would want to cross. At the same time, we got to see here that Gwyn has a heart like anyone else and can be kind when he wants.

The not so good things:
- Predictability. I no longer get surprised when reading a book by Cassandra Clare. The traits are all the same in all of her books: love triangles, cursed love, drama, enemy in the midst, big fighting finale, one death, etc. That is not necessarily a bad thing. Those are the traits she is known for and it is what people want to read. I guess perhaps I am the one 'outgrowing' the shadowhunters stories.
- Love triangles overload! Guys, I am sooooooooooooo tired of love triangles.
First we had Emma, Jules and Mark. It was silly and ridiculous. I was hoping for a relationship to develop between Mark and Emma. They are very much alike and I think they would make a great couple. But, alas, their relationship was fake. All it did was hurt all three of them.
Than we have Mark, Kieran and Christiana - and let me tell you, that was just plain freaking weird! I am pretty sure all three of them would be more than happy with a 3-way relationship. The whole thing felt forced. I felt like Cassandra Clare was trying to shove Mark and Christina down my throat. Than Christina and Kieran too. Also, no one forgives and forgets that easily, so it felt fake as well.
Lastly we have Ty, Livvy and Kit. It very much sounded like a love triangle for most part of the book. It wasn't in the end, but infuriated me nonetheless.
- Drama! OMG! was this a script for a soap opera? WAY TOO MUCH DRAMA. The usual action packed shadowhunter novel got completely lost in a sea of drama upon drama. There was no battle scene, no suspense, no action...The "I-want-to-touch-you-can't-touch-you" drama went on for pages and pages and pages... Between Mark and Kieran, Between Mark and Christina, Between Emma and Jules... and when that wasn't going on it was the "I'm-thinking-about-you-shouldn't-think-about-you". That envolved all the previous couples plus Kieran and Christina. I was so very sick of it. Ended up skimming much of that.
- Who is the villain? I love my villains! We got 400 pages of boring overpowering drama and maybe a chapter or two of villain time. I want to know so much more about the The Unseelie King! The book is called Lord of Shadows and yet so LITTLE of it is about him. You start and end the book knowing exact the same amount about him. I am so freaking intrigued by him (hence I will read the next book, do not disappoint me again C Clare!)
- The length of the book. This book felt 3 times longer than LM even thought that is not the case. The story was so boring at times and so suffocating that it just wasn't that enjoyable to read.
- Jules. He is a sociopath. Seriously! Look up the dictionary for the definition of a sociopath and you will know what I say is true.
"Sociopaths tend to lie, break laws, act impulsively, and lack regard for their own safety or the safety of others" That and the fact most of them fixate on things/people. Does it sound like someone we know? The guy is ruthless and has no care for anything and anyone that is not his family. He was gonna let a kid die if Emma had not intervened. That he is heartless is said throughout the book, but in a way that makes it sound like it is a good thing, an honorable thing. Well, my answer is this: many sociopaths destroy things, murder and commit many atrocities because they believe their cause to be honorable.  His coldness and ruthlessness should not be presented as a positive. It is not ok. Unless of course C Clare is setting him up to be one evil man in the next book (which I doubt but would in fact make him rather interesting)
- Agenda pushing! Oh how I hate that. Diversity in books is great, but not when it is forced upon the reader. Magnus and Alec's relationship worked and it was beautiful because it grew with time, asit would in real life. It was written with respect and care, it felt real, there was beauty to it. There still is. I adore them! Diana's story was simply and purely agenda pushing. That's one big secret to tell someone you saw as an enemy till 5 minutes ago. Just NO. As I said, diversity is ok, it is good. Agenda pushing is not, I have the news for that. It ended up sounding stupid to me rather than courageous because all I could think about while reading it was how retarded it was she was trusting such a big secret to someone she didn't trust or like till last freaking week.
- The Spanish boys... what exactly was the point of their existence?

So... yah... Didn't love it. I am going to read the last book, for I need to know how it ends. But will I run to the store to get whatever she publishes next? probably not. I think I am done with predictable shadowhunter stories for the foreseeable future.