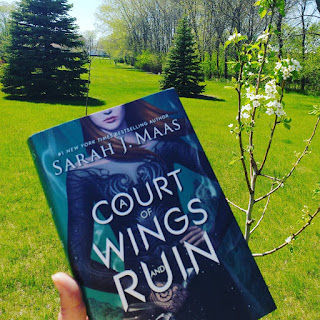 The long anticipated Sarah Maas' book is here! I am pretty sure that 8 out of 10 posts on my Instagram lately have had something to with it!

I finished reading the book 4 days ago and I have been waiting for my mind to 'cool off' to write this review.
I, for one, do not believe the book was as great as A Court of Mist and Fury. I know some of you (albeit few) will agree with me on that.
I also believe A Court of Thorns and Roses was better... but do not fret! NONE of you will agree with me on that! LOL I just happen to have an undeniable and unbreakable love relationship with Tamlin...

So... this book will be spoiler free until I start talking about my beloved -Tamlin- At that point, if you don't want to be spoiled, I recommend you stop reading. Don't worry, I will give you a warning.

Here is why the book was great:
We learnt through out the book so much more about all the characters we have come to love! Every single member of the inner circle has their moment at the center of the story. Some of their secrets are revealed, more possibilities arise, friendships are both tested and strengthened.
We also learn more about the other courts. One in particular with a little secret that has everyone hoping for a book on one very specific character! -not inner circle-
Old characters make an appearance, like the lovely Tarquim and the ever so obnoxious Autumn court boys.
Rhys and Feyre's dynamic is great, as it was expected by the entire Sarah Mass fandom! LOL
If they survive or not is another question entirely... I shall not reveal 😀
It is hard to say much more without revealing the plot.

Here is why it is not, in my opinion, worth 5 stars:
This is meant to be a trilogy. Trilogies need an ending, a conclusion... Acowar does not have that. A LOT of questions are left unanswered. I understand that Sara J Maas has novels and novellas coming out for acotar, but this should not be called a trilogy if it was not going to have a fulfilling ending. I genuinely enjoy and prefer books that leave a somewhat open ending, its more realistic like that, and I often complain on my reviews of authors that tie everything up on a little bow at the end. But too much of the opposite is not good either. The novel coming up on acotar next is not a novel, is book 4. Either that, or my 3 score is going to eventually go even lower. Answers are needed.

I also don't like the vast majority of females in acowar. Feyre is mean and self-centered. While she is in the spring court she forgets the enemy is not Tamlin's people. I hated her for it. Mor reveals secrets about herself that in my opinion make her come across as a very selfish person. The inner circles loves her, there is no reason to keep such a secret and hurt people on the way because of it. Nesta is b***, but that has always been my opinion of her. She somewhat redeems herself in acowar, but not by much. And Elain is just so unrealistic.... Amren though... loved her character from beginning to end!
Anyways... I should probably just give you a little disclaimer: I am a ToG fan. I like acotar, but ToG has my heart!

That's my overall, spoiler free review. Now I need to chat a little about my beloved, so if you don't want spoilers go away. Stop reading. Right now!
Last warning!
Spoilers ahead...

So... Tamlin! Although I have not yet found one person that loves him as much as I do, I have found many that hoped he would redeem himself in acowar. Many that thought he did. And many that thought he did but was also a childish idiot.
I, obviously, think he redeemed himself and some.
But that is not why I need to talk about him. Feyre is the reason.
Guys, I know you all love her and Rhys, but I was fuming at her! Feyre was so selfish and self centered when it came to Tamlin.
Rhys has made many mistakes. Court of Nightmares still exist... do I really need to say more?
And yet, she always forgives. She hears him out, she gives him the credit of doubt. Always.
When has she ever given Tamlin that? She simply assumed he was on Hybern's side and proceeded to try to destroy his home. Even Rhysand has given him a little more credit (when in the meeting he immediately believed Tamlin was on their side).
What Feyre did was wrong.
Tamlin may be misguided, but he loves her just as much as Rhys ---> helping her fly and fighting for her after everything she did?! I mean... couldn't be more obvious.
He has anger issues. Sure. But so does almost every single High Lord! LOL
Also, Feyre is in part responsible for EVERY bad choice Tamlin has ever made.
They both changed under the mountain, they both needed healing. He needed her to be safe after that. Was it wrong of him to lock her up? of-course it was. She had every right to leave. But at the same time, the only time he ever let her go she ended up under the mountain and DIED. He need her safe to heal himself. So...this is what I think: she should have left. She should have joined the night court. But her message to him should not have been 2 lines long. She should have explained.
While she was in the Night court healing, Tamlin was getting worse and worse every day. The woman he loved was with a monster. Because guys, Rhys was a monster to everyone outside his court. No one new his true self. In Tamlin's mind he was torturing her. In his mind he failed her again. Rhys would have gone to the exact same extremes to have her back and safe.

I sincerely hope one of the novellas is one him. He deserves a much better ending than what he got: alone and still broken.