January 08, 2019
Three books down in 2019 so far, all older releases, and all amazing books!
I love reviewing arcs (and my next read just happens to be one), but there is something special about finding an older book by an author you love. I am really enjoying the Fighting for Love series. It is not what I expected from Gina after reading the Playboys in Love series, but not in a bad way. It is steamy but also sweet, specially this one. Do I prefer it over Playboys in Love? never LOL Roman from Ruthless has me till end of time. But, he does have stiff competition, Irish was fab! 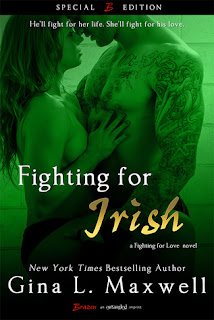 He'll fight for her life. She'll fight for his love.Kat MacGregor has forty-eight hours to make good on the debt her ex-boyfriend owes a crime boss. Unfortunately, the measly tips she makes waitressing are barely enough for her to live on, much less cover the twenty-thousand needed to keep her breathing. With time running out, Kat 's forced to accept help from the only man who's ever made her feel fire rather than fear.When he learns a friend's sister is in trouble, former Boston MMA fighter Aiden "Irish" O'Brien heads to Louisiana to offer himself up as collateral to keep her safe. But to satisfy the debt, he has to do the one thing he swore hed never do again: fight. With more than just money on the line, will Irish have what it takes to not only reclaim the man he once was, but become the man he needs to be for the woman he can't live without?

Fighting for Irish was a sweet and indulgent read. That was not how I felt while I was reading it though. It definitely has some triggers not everyone would feel comfortable with, and since I know at least two of my readers that fall into that category--> please beware this book has scenes with sexual abuse.
Still though, even with that and all the fighting the feeling I was left with at the end was that of utter contentment and satisfaction. I have no idea how Gina pulled that off -hail to all amazing writers of the world- but the book was equal parts intensity, heat, drama, and pure freaking honey! 🤣 That may not make sense to you, but it does to me... so... just roll with it!

Kat was a fabulous broken beautiful character. Her demons are soul crashing and it is a miracle the girl is not completely messed up. I loved her fighting spirit.
And Irish... goodness... he was perfection. Understanding and kind while dealing with his own nightmares.
Those two were perfect for each other.
Go Read Sunnies!