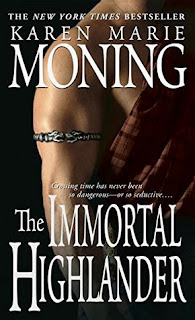 It has been some time since I've had to write one of these. I've read a lot of books these last two months and haven't really had the time to sit and write a long review on every single on of them. So I hope the few short lines bellow help you some.

Kiss of the Highlander (Highlander #4) by Karen Marie Moning, 5 Stars

This series is an easy "go-to" for me when I want to read something I know I will like and that won't take me forever to finish. Kiss of the Highlander has some humor while being romantic and sexy. Drustan has been "sleeping" for nearly five centuries when Gwen, literally, falls on top of him. From than on is a matter of him convincing her he is not mad and her deciding if she trusts and believes on him or not. As for The Immortal Highlander, I wouldn't recommend reading this one without having read the previous books. Adam Black is a very arrogant and full of himself fae that you can't help but love. He was punished by his queen for something he did in the previous book and no one can see him. Until he crosses path Gabriel that is. She can see him, and now he needs her help to get to his queen so she will restore him to his formal glory.

I am trying to read more MC books this year, I really like them and I am happy to say this one was a good read. MCs are not for everyone, specially if they are done well. They rarely deal with characters that are in good standing with society. Marie just left an abusive relationship, and getting together with a big bad ass biker is not in her plans. Horse (yes that is his name. And yes, for 'that' reason) disagrees. When her brother steals from the club she becomes the perfect bargaining chip. Horse pays the debt, but she is his to do with whatever he wants...

Cherish Hard (Hard Play #1) by Nalini Singh, 3 StarsAnother great read by Nalini Singh. She always write great stories. I have to say though that I much prefer her paranormal books. Although this one was good it didn't excite me and at times I even found a little boring. Sailor wants to create a successful landscaping business and is solely focused on that until he meets Isa, the daughter of the company he just signed a contract with. They end up working together and getting to know each other really well. But is it meant to be? she doesn't need another workaholic in her life and Sailor needs to work hard if he is to succeed with his plans.
Baker (Devil's Disciples MC #1), 2 Stars

This book had a promising plot. The MC robs a bank and six months later the girl whose life turned upside down because of it ends up getting a job next door. Is it coincidence? It could have been good, really good. But, it is a little offensive to brasilian woman and woman in general really. On top of that the plot is full of holes and things that don't connect.

Another good MC! Remi lost her dad and trying to juggle university, her dad's business, grief, and having a normal life. It is hard and she is failing. Steel does not walk in the right side of the law and although he cares for Remi and wants her to be his one of the clubs dealing messes up her life and not in a good way. Can he fix it? will she forgive him?

I never read anything that dealt with Asian hierarchy in so much detail, and so I was intrigued and very interested through out, but at times it was a little much. The romance is heavily imbedded and has a direct correlation to the way the hierarchy and society of the time worked. It was sweet, full of drama, and frustrating all at once!