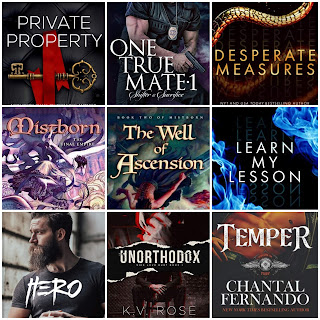 I read a good amount of older releases this past two months. I will not write long individual reviews for every single one of them but here are is a little bit about each one of them:

- Visions of Heat by Nalini Singh

It's unlikely I will ever dislike something Nalini writes. She is a master of her craft. This is the second book in the Psy-Changeling series and it is just as good as the first. Shy and isolated Faith is plagued by visions of blood and murder. She has questions and needs help but can't ask those around her. She turns to the changelings and the only Psy she knows that has defied her race (first book in the series). Vaughn is more cat than human but has to control his instincts not to scare Faith away. This was a fabulous paranormal romance read but you really must read the first book first! 4 stars from me :)

Desperate Measures is the story of Jafar and Jasmine. But if you read Katee before you know it is not that simple at all. It can honestly be described with one 'simple' question: "What if the villain got the girl and she liked it?". This was erotica/bdsm and that second bit is not really my thing. So although I really enjoyed the romance and Katee's wicked take on these popular characters there were scenes I just couldn't enjoy. It was a 3 from me!

- Learn my Lesson by Katee Robert

This is the second book in the Wicked Villains series and has three main characters: Hades, Hercules, and Meg. Hades sets the rules, Meg is his Queen and for the most part abides to his rules. Hercules is tricked into believing Meg is with Hades against her will and makes a deal with Hades to set her free. Now he is entangled with them with no apparent way out... not that he wants to get out! the chemistry was there but this one fell on the erotica with lack of content category. I don't mind those at all but I spent most of the book wishing for more story, more background. So another 3 for me!

- One True Mate by Ladew

I read this a month ago and I cannot tell you a single thing about it. I think that says it all... It was 2 stars. Not bad just 100% forgettable.

- The Final Empire by Brandon Sanderson

Ah yes! Here is a title worth all the buzz. If you enjoy a good fantasy you will most certainly enjoy this one. A brilliant thief gathers a crew to take down the evil ruler! It sounds simple, but it really isn't. Not much goes according to plan, or at least it seems that way to the reader. The book kept me engaged and entertained beginning to end. It was a 5 from me!

- The Well of Ascenssion by Brandon Sanderson

The second boon in the Mistborn series by Sanderson was good, really good, but it wasn't as good as the first. A tad slow at times. The Lord Ruler may have been defeated but that doesn't mean the work is done. Much the contrary, now there are 3 armies at their doorstep and with their brilliant leader gone it takes some time for those left behind and in-charge to stand up for themselves and for their people. 3 stars.

This book is dark dark dark and should come with 100 trigger warnings. I didn't dislike it but I don't feel great saying that I liked it either! Max is evil. He may have his reasons for the things he does and you do feel for him at times but none of it justifies his actions. And Addison is just a pawn. A pawn that makes him feel, but a pawn all the same... I am not adding a link to this one because I am not comfortable with something I found out about the author, but you be your own judge and look it up if you wish. It was a reluctant 4 stars from me.

This is not my usual read at all, but I've been trying to read out of my comfort zone (as you probably noticed since all the titles here are quite different) and I am glad I gave this one a chance. I LOVED it. Family. Family and all its beauty. Family with all its issues and ugliness we try to hide. The Butterfly Room is just that. It's the beautiful and at times sad and heart wrenching story of Posy when she was 7, Posy at 70, and her sons successes and failures. 4 stars.

This series is the kind you grab when you want something easy to read. Some of the topics in this one are meant to be a little heavier but the way Hayley writes it makes it almost a passing thought (and I am not saying that negatively). The story is straight forward- insta love, move in together, have to break up for x and y reasons, hero comes to his senses and fix things. Great late night read but nothing that consumes your thoughts for weeks after. 3 stars.

Chantal Fernando always pleases me with her writing. Her books are easy to read and great late night reads like the book above BUT the characters will remain in your memory for weeks after. There is a little more grit, a little more plot, and a little more chemistry in them. Every year temper stops at the same bar and asks the same girl out. It takes a long time, but one year she says yes. And of-course, that is the year things go wrong with the MC and Temper has no choice but to temporarily kidnap Abbie... 4 glorious stars!

A manga retelling of a classic. A really weird spin off of a classic. There, that second description is better! I liked it, but I am still wrapping my head around it too. Yukko wakes up to find that she has shrunk. Thankfully her dog has not and he still listens to her so for now she is somewhat safe. As she goes around with her dog she finds she is not the only one that has shrunk, it seems many but not all humans have. Alice appears out of nowhere towards the end and I guess we will find out her role on the volumes to come. 3 stars.

I really like this!!! Why is that such a big thing? because I don't read horror, I don't like horror, and never have. And yet... this was really well done and really well written. The concept is great! He is human, but he is not...

“I’m not the protagonist of a novel or anything. I’m a college student who likes to read, like you could find anywhere. But.. if, for argument’s sake, you were to write a story with me in the lead role, it would certainly be a TRAGEDY!”

There. Let that entice you!

This was a fun BL manga. I rather like all the mangas by sublime so I knew I would like this one. Izumi's parents are stars and his mum uses him for a TV commercial when he is still a kid and the child actress doesn't show up. She dresses him as a girl and all is well. Expect that 10 years later he doesn't want to have anything to do with the business and they want to do a 10 year commercial with the kids as the main couple. You can guess how that goes! There was one scene that needs a trigger warning and I can't say I loved it but everything else about it was really well done, sweet, and funny! 4 stars.

Copy and pasted from my Goodreads. Because, lazy... hehe:

Oh look, it's me again disliking a book with mostly good reviews 🤦‍♀️ my unpopular opinions list is getting longer and longer by the day.
Anyway...
First problem: I read this book before. By another author. Or at least a very very eerily similar one. Those things happen on popular tropes, so I'm not accusing the author of anything. But it was at times so similar the dejavu was intense. Except that other book was written well and I liked it 🤷‍♀️
Second problem: the kid. As a rule of thumb kids on romance books and me don't agree. But it can be done well. This wasn't. The girl was a 6 year old that sounded and acted like a teen. The schoolwork was for a much older kid as well. Awkward.
Third problem: childish adults. Beau wants to f*** Jane. Pretty much forces the situation. Than decides that ain't good cause he is catching feelings so sends a plane to some rich b*** to come f**** him instead. Jane's inner monologue is repetitive and bored me to death.
Fourth problem: apparently there is a cliffhanger ending. I stopped reading at 75%. I hate cliffhangers and I'm not liking the book one bit so I'm just stopping right here.
Fifth problem: and this is personal. I'm a foster mother. Many foster parents are s****. BUT there are more good ones than bad ones. Why does every darn book has to write foster parents badly?
Not for me.
But there is a book for everyone right?! Have fun reading.

And that's a wrap! Thanking you for reading this far and I hope something here catches your eye (or not) hehe :)