Hitched to the Gunslinger by Michelle McLean [arc review]

Western Romance... I am sure you, romance aficionado, knows all about it. Because I avoid reading too 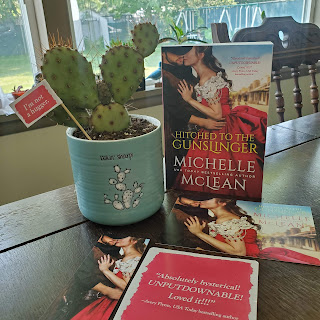 many cowboy romances (just not my thing) I kind of put Western in that same category and never read it. Thankfully Entangled Publishing saw to rectify my mistake by sending me a book with a fabulous cover, awesome title, great blurb, and therefore trapped me into reading it. And now that I've read it... where is the next one Michelle McLean?

And of-course, now that I know this is not your average 'put me to sleep' cowboy romance (again, just not my thing), I also have to go on a quest to find all things Western Romance. I am currently listening to Texas Destiny by Lorraine Heath and loving it just as much as I loved this beauty. Two completely different books, but both Western Romance, and both amazing!

Now that you know my history with Western Romances you will understand when I say I went into this book with zero expectations. In my mind I just had: "it sounds fun. It better have some humor". That's it. Boy did it have some humor! Gray "Quick Shot" may be good and quick with a gun but the guy is the laziest man I've ever read about. I think there is talk of napping every 3 or so pages. And I don't mentioned that in a negative way, it's hilarious. Gray wants to believe he is retired from shooting people and all he wants is peace and quiet with a hot meal. The meal doesn't even have to be good. And considering our main female character is absolutely terrible in the kitchen, that is his only choice if he is to stay in the small town of Desolation.

Mercy was his opposite in almost every way. She doesn't have one lazy bone in her body and is a very intense character. She has opinions, questions, wishes, things to do, place to be... But she is a woman and one of her neighbors wants her land bad. Bad enough that although she is a tough cookie she might not be tough enough alone. Bad enough that having Mr "Quick Shot" around as her fake fiancé and then real husband is the only choice she has.

Their relationship was amusing. There was plenty of banter, sarcasm, and chemistry. All the secondary characters were entertaining as well. Give me more? an easy 5 out of 5 stars.

Gray “Quick Shot” Woodson is the fastest gun west of the Mississippi. Unfortunately, he’s ready to hang up his hat. Sure, being notorious has its perks. But the nomadic lifestyle—and people always tryin’ to kill you—gets old real fast.Now he just wants to find a place to retire so he can spend his days the way the good Lord intended. Staring at the sunset. And napping.When his stubborn horse drags him into a hole-in-the-wall town called Desolation, something about the place calls to Gray, and he figures he might actually have a shot at a sleepy retirement.His optimism lasts about a minute and a half.Soon he finds himself embroiled in a town vendetta and married to a woman named Mercy. Who, judging by her aggravating personality, doesn’t know the meaning of her own name. In fact, she’s downright impossible.But dang it if his wife isn’t irresistible. If only she’d stop trying to steal his guns to go after the bad guys herself.There goes his peace and quiet...

Find the books at: Inklings Bookshop