The Last Legacy by Adrienne Young 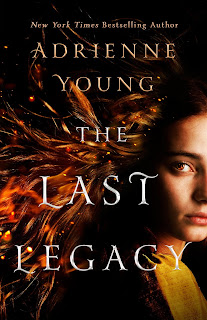 Adrienne Young has written some amazing stories and some really bad ones too. But the amazing ones are so so so good that I can't resist when a new book comes out. The Last Legacy was the first book by Adrienne Young that I neither loved or disliked. It had a very good story but it was a little slow to start and the end was abrupt.
The Blurb:
When a letter from her uncle Henrik arrives on Bryn Roth's eighteenth birthday, summoning her back to Bastian, Bryn is eager to prove herself and finally take her place in her long-lost family.Henrik has plans for Bryn, but she must win everyone’s trust if she wants to hold any power in the delicate architecture of the family. It doesn’t take long for her to see that the Roths are entangled in shadows. Despite their growing influence in upscale Bastian, their hands are still in the kind of dirty business that got Bryn’s parents killed years ago. With a forbidden romance to contend with and dangerous work ahead, the cost of being accepted into the Roths may be more than Bryn can pay.
Bryn was a weak character the first half of the book. It took her a while to get a back bone, but once she did she became a little more interesting. That being said, she was written well through out, she is meant to be a teen and she sounds very much like one. So the problem here is not her but me, hehe. I can't handle teen characters anymore, hence I don't read YA as much as I used to.
The more interesting part of the book was the Roth's family. They were a fascinating combination of scary and enthralling, serious and fun. Henrik, the head of the family, was a monster, but he was also kind of hard not to like. He takes cares of his family, the problem I suppose is that if someone makes a mistake the price they pay is rather high, family or not.
Ezra, the silversmith for the family, is the single most important character in the book. Everything Henrik wants depends on this guy. All Bryn wants eventually involves him. And in the end he is also what Henrik's competitor's want. He is talented and the Roths need him. And yet, the focus is on Bryn the whole time.
I was also disappointed with the ending. I read this in audio format and the book wrapped up in the last 20 minutes. It was too abrupt. There isn't a cliffhanger but there are tons of unanswered questions.
All in all, it is a good book. The story was compelling and kept me engaged. But it had a slow to start, an abrupt end, and the main character - Ezra, not Bryn - needed a lot more page time.
Go read!
The Last Legacy at Inklings Bookshop