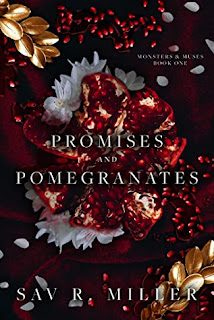 I was very excited about this read. The reviews are good, the people recommending it were people whose recommendations I have liked in the past. And in the end, at did like this one. But I will confess from the start that Promises and Pomegranates did not blow me away.

Elena
To most, Kal Anderson is a villain.
Harbinger of death, keeper of souls, frequenter of nightmares.
Doctor Death. Hades incarnate.
They say he stole me.
Usurped my fiancé and filled the cracks in my heart with empty promises.
Imprinted his crimson fingerprints on my psyche and tried to set me free.
They’re not wrong, per se.
Except it was my choice to stay.

Kal
To most, Elena Ricci is an innocent.
Goddess of springtime, lover of poetry, angel of my nightmares.
Little one. Persephone personified.
They say I ruined her.
Shattered her virtue and devoured her soul like a succulent pomegranate.
Embedded my evil as deep as I could possibly get and tried to set her free.
They’re not wrong, per se.
Except it was she who ruined me.

*Promises and Pomegranates is a full-length, standalone, dark contemporary romance based loosely on the framework/characters from the Hades and Persephone myth. It features mature themes, explicit scenes, triggers, and strong language. If you’re not a reader of the genre, this book may not be suitable for you. Reader discretion is advised.

Let's start at the end... why oh why does every darn book has to end with pregnant women and/or babies and kids? I could have happily skipped that chapter!

Apart from that, the second half of the book was really good. It had a good pace, a good story, fantastic chemistry.

Kal is a dark character for sure. He may have ended up in the life he has by circumstance and not choice but he certainly enjoys the killing and the blood. He is a doctor and a hitting man for the mafia, an intriguing character for sure. I absolutely adored Kal. A lot of time and effort was put on writing him well.

Elena was... the daughter of one powerful head of the mafia? She smells like pomegranate, has a pomegranate tattoo... She is not a bad character at all, she just lucked substance in comparison to Kal. There was so much to him, to his past, to his profession, to his personality and family... she just came up short.

The rest of the book was ok. The first half dragged a lot. And the second half although a million times better is not without its problems. The secondary characters were either boring or forgettable, I just finished the book 2 hours ago and I already can't tell you their names. And the plot had potential. Parts of it, the marriage by force, the attraction between Kal and Elena, etc were really really good. But other parts fell flat. As I already mentioned her character was not as well developed, the side story of her mother's past was a tad off putting and unnecessary... Also, for the hardcore lovers of Hades and Persephone out there, if their names got removed from the book no one would know this was supposed to be based on them, something to keep in mind I suppose.

Not a bad book at all. But not great either.