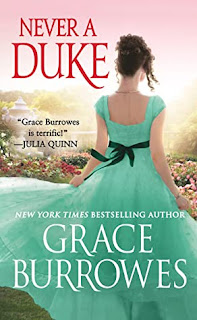 I absolutely adore this series, I will never be able to forget Quinn and Jane from the first book, My Only and Only Duke, and even less my favorite to date, Lord Stephen, from book 6, How to Catch a Duke. All the books in this series are very well written and have charming and lovable characters.

It is often the case that one can pick up any book in a series like this and read that without having read the others. My one and only issue with Never a Duke is that you really can't do that. There is an immense amount of focus on characters from previous books and it sadly distracts the reader from Ned and Lady Rosalind's love story. I love when previous characters make an appearance, but this was a just a tad too much. I was getting confused because liking it or not it is hard to keep 6 other couples straight in your head, especially when you read so many other books in between. It was just all a little too much.

But, don't let that deter you from reading this beauty. As always, Grace Burrowes created characters you can't help but relate and love. Ned comes from humble origins and doesn't always feel worthy of the position and things he has. He sets himself apart from the family that adopted him and loved him through the years and it takes some time to show him and the Wentworth's' that Ned is not that kid from the very first book in the series anymore. Rosalind may not come from humbles beginnings and still reside with her family but she also feels like she doesn't belong and eventually we figure out why. They were perfect for each other in every way. More of just them getting to know each other was needed, but that doesn't mean they weren't amazing characters.

Despite having humble origins and a criminal past, Ned Wentworth has learned to dress, waltz, and express himself as elegantly as any lordling. When Lady Rosalind Kinwood’s maid goes missing, her ladyship turns to Ned, precisely because he still has friends in low places and skills no titled dandy would ever acquire, much less admit he possesses.
Rosalind is too opinionated and too intelligent, and has frequently suffered judgment at polite society’s hands. In the quietly observant Ned Wentworth, she finds a man who actually listens to her and who respects her for her outspokenness. As the search for the missing maids grow more perilous, Rosalind and Ned will have to risk everything—including their hearts—if they are to share the happily ever after that Mayfair’s matchmakers have begrudged them both.
Find the book at:  Inklings Bookshop - Bookshop.org