It has been a crazy month and I fell behind badly on my reviews! But here are some highlights for you. 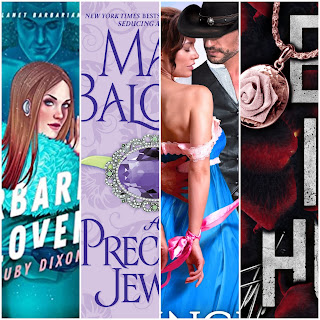 Although I liked this one it is my least favorite in the series so far. The book was going well until a little over the halfway point when it just doesn't read right. She accepts leaving someone behind too easily and although up to this point the book does a good job at dealing with infertility it all of sudden throws it all out of the window. So good, I will carry on with the series, but not great.

This was different, unique. And I like that about it. I have not read any other book quite like it. She is a prostitute; he starts of as just any other client. The story was sweet and interesting. The MC comes across rather clueless at times, but it is somewhat endearing. The romance is believable and they make a very charming couple!

I loved this book. It was full of charm and laughter, much like the first book in the series. The characters had chemistry from the start and the banter between them was utter perfection. I need more gunslingers in my life and so do you!

I have complicated feelings towards this one.  I loved it. But I also didn't.  It's a 5 star.  But it's also a 2 or a 3...I read dark romance a lot and there is usually some redeeming quality or at least a reason behind the MC's madness. There is nothing like that here.  Dare is a LITERAL psychopath. And the heroine doesn't grasp the intensity of it until it's too late. So.... they are together at the end.  And happy?! But it's not your traditional happy ending. I loved it. And I didn't.

Kira plans on remaining single on this alien planet—she doesn’t want a mate anyway. At least, that’s what she tells herself. But when Aehako comes along, everything changes. . ..As one of the humans stranded on the ice planet, I should be happy that I have a new home. Human women are treasured here, and one alien in particular has made it clear that he’s interested in me. It’s hard to push away the sexy, flirtatious Aehako when I long to grab him by his horns and insist he take me to his furs.But I’ve got a terrible secret—a few of them, actually. I’m convinced that Aehako can never love me if he knows the full truth. More worryingly, the aliens who abducted me are back, and thanks to the translator in my ear, they can find me. My presence here endangers everyone . . . but can I give up my new life and the man I desire more than anything? And will he even want me if he knows my secrets?

New York Times bestselling author Mary Balogh weaves a sensuous spell of romance that brings together the unlikeliest pair of lovers in the unlikeliest place of all– an infamous London house of pleasure.
She was unlike any woman he’d ever met in the ton or the demimonde. But Sir Gerald Stapleton frequented Mrs. Blyth’s euphemistically dubbed “finishing school” for pure, uncomplicated pleasure–and nothing else. So why was this confirmed bachelor so thoroughly captivated by one woman in particular? Why did he find himself wondering how such a rare jewel of grace, beauty, and refinement as Priss had ended up a courtesan? And when she needed protection, why did Gerald, who’d sworn he’d never get entangled in affairs of the heart, hasten to set her up as his own pampered mistress to ensure her safety–and have her all to himself?For Priscilla Wentworth, the path leading to Sir Gerald’s bed had been as filled with misfortune as it suddenly seemed charmed. But Priss couldn’t allow herself to believe she’d ever be more to a man like Sir Gerald than a well-cared-for object of pleasure. Now, despite Gerald’s deep distrust of marriage, neither scandal nor society’s censure can keep them apart–only the fear of trusting their hearts.

The Gunslinger's Guide to Avoiding Matrimony

At the ripe old age of twenty-eight, desperate-to-retire gunslinger Adam Brady has exactly two rules. And one of them is never, ever get married. So he’ll be danged when his dreams of permanently avoiding the bounty hunter on his tail in Desolation, the only town where notorious men like him can find respite, comes with one helluva string attached. The town has a new rule: gunslingers welcome—if they get a job…or marry.Without realizing it, Adam stumbles into a big town wedding and accidentally marries Nora Schumacher, a sassy-mouthed mountain of a woman with legs as long as his wanted poster. So what’s a gunslinger to do but get himself unhitched and find a job. Any job. Except Adam keeps getting fired, one odd circumstance after another. And he’s running out of options.Desolation was supposed to be his safe haven. Except, he’s not only running from his past but from the irresistible woman he married. And worse, he’s finding that he rather likes the enticing, if damnably independent, wife of his. But some men just aren’t the marrying kind. Only, if he leaves, his own life won’t be worth living. If he stays, he puts the lives of his newfound family and the woman he loves on the line. So much for Desolation being the answer to all his problems.Each book in the Gunslinger series is STANDALONE:* Hitched To The Gunslinger* The Gunslinger’s Guide to Avoiding Matrimony

He could have been my hero.He saved my life that night, a beautiful dark angel slicing through my fear and the water, dragging me from its deadly clutches.He should have been my hero.I thought maybe he was.Villains aren’t supposed to win, and good should always conquer evil, but in the elite coastal town I live in, the only purpose a label has is letting you know what something—or someone—costs. Good, bad; it’s all relative, and it hardly matters. Baymont, California is a land of beautiful villains and happy-ever-afters that are just out of reach.Especially for me.Until Dare moves the world beneath my feet, and even though I’m afraid to trust it—to trust him—boy, am I tempted.In more ways than one.Being with Dare is scary, but being without him is impossible.He makes it impossible.Dare’s no hero, that much is clear, but maybe…Maybe he’s mine.This story contains triggers and is intended only for a mature, adult audience. See the opening author's note for more explicit triggers, but know this is a very dangerous relationship with a very dark hero.