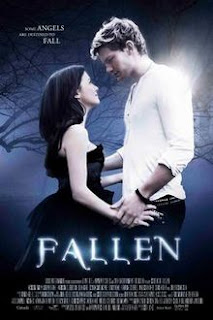 Doing something different today- writing a review on a book turned movie.

The ever so cheesy Fallen Series by Lauren Kate was the very first ya fantasy I read and fell in love with. That was 8 years ago now ... time flies!


To me, it is pretty straight forward- if you haven't read the books the movie will probably feel too cheesy and with not enough depth. You will struggle to connect to the characters and the story and acting will both feel forced (even if that isn't the case).
I will recommend you only watch this if you have read the books and you liked them! And that my dearies, go against everything I believe...

Because you see... I almost always hate movies based on books I loved. I purposely only watch book based movies if I have not read the books, and I do not read the books for movies I loved either. That is so as not to destroy a book and/or movie I have come to love.
I realize this makes me sound rather harsh, but I rather avoid disappointment and sadly that happens far to often. The last time I broke my own rules was for Everything Everything and the movie was soooooo  boring. The book is a million times better.

I decided to watch Fallen because it has been 8 years and I thought that since the book is no longer fresh in my mind it had a better chance to not disappoint me. I was right. Luckily!
Not everything is accurate. A few things got changed, there were a few omissions... but not enough to detract from the book. All in all is was rather accurate.
I rather dislike the Twilight comparisons. I did not believe that to be accurate about the books and I do not believe that accurate here. And yes, I like them both. My guilty pleasures I suppose! The only common thing between the two is that they are both very very cheesy. Cringe worthy cheesy. I may not like that kind of thing every day, but there are days were there is nothing better to take your mind off things.

My inner teen loved the special effects. They are soooo cheesy! Did I say cheesy enough times in this review?! 😄
The energy angel wings instead of real wings were an interesting touch. I loved the glimmery effect!
Daniel's butterfly swim across the school pool was captivating.
Luce's flashback gave the characters some depth, not enough for those who have not read the books, but enough to satisfied those, like myself, that are fans of the series already.
All in all the cinematography was good. Low key, therefore perhaps not the best quality, but well done.

Now for the actors... I wasn't sure about them going into this. But it worked out pretty well. Luce was as pitiful and lost as I imagined she would be. Pretty, but not drop dead gorgeous. Had a presence, but not overwhelmingly so. The actress pulled off the confused and lost look I associate with Luce's character well. Daniel had the polished strong jaw look I thought he would have (not my type, but true to the book. I wasn't a fan of his looks there either). Jeremy Irvine was a good pick for Daniel's character for sure. His eyes alone conveyed the longing Daniel has for Luce during the entirety of the first book. Cam is were things go south a little. The voice is on the money! He spoke and I swoon (as you can guess I rooted for Cam the whole series). But he looks too young. He looks younger than both Daniel and Luce and that is not accurate or good. Not a bad actor though, just as I said, wrong looks for the part, and that can destroy a character.

Conclusion: As a Fallen fan 3.5/5 Stars. It needed a better actor choice for Cam. It needed to be a little longer so that the secondary characters got appreciated more. And liking it or not the cinematography quality wasn't great. I liked the ways they tried to make it work, but it was obvious the budget wasn't all that.