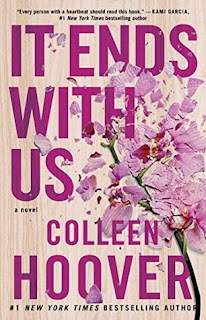 The reality of this book has left me speechless. I have been staring at this computer screen for a good hour now trying to find the right words. And that is after I spent a good 6 hours in my couch reading it. This is not the kind of book that can easily be put down to be read later, there are no good spots to stop. Once you start it becomes incredibly difficult to take a break.

The story is complex. It is raw. It is honest. It is sad. It is painful.

It shows the reality of human nature. The reality that we are not black and white, simply good or bad. The vast majority of us fall somewhere in the middle- people that make mistakes.
It Ends with Us is told through Lilly's eyes. It is told in the present tense but we also get glimpses into her past as she reads journal entries from when she was a teen.
Lilly is brave and strong. But also as vulnerable as any other woman out there. I was rather impressed with her character, with her sense of self and her ability to prioritize. She had many hard choices to make and she made them well. They were hard, very hard... and there will be a small part of you, as there was a small part of her, who will wish different, but you will know that she did the right thing in the end.
Riley is amazing! I absolutely loved him. And he is the perfect example of how things are not always as they seem. But most importantly, of how often there is so much more to someone's story than we know. Everyone has a past and everyone is -for better or worse- defined by that past. I believe with all my heart that Colleen Hoover chose the right ending for both Lilly and Riley, but I do not believe someone like Riley should be treated with hatred. I felt his pain, specially in the end.
Atlas was pure perfection. There are so many kids out there in the world like him. How wonderful would it be if there were more Lillys?!

All in all this was a fantastic read. Super emotional. Heart wrenching.

When the book was over though something did not feel right. The last 3-4 pages felt rushed. Lilly 'jumped ship' too fast.


And all that being said, I feel I should mention something I did not see mentioned anywhere and I was certainly not told myself: if you have been in a abusive situation (parents/partners/other) and still have hard days, don't read unless you are having a good day. I will be honest and say that had I know what the book was about before reading it I would not have read it. I felt in the end of this book similarly to how I felt when I finished reading The Problem with Forever two months ago (another book I started without knowing what it was going to be about)- reliving memories better forgotten. It was far to real, and if you, like me, can relate to the main female character in either of those books, you also know you need to be in the right frame of mind while reading it...