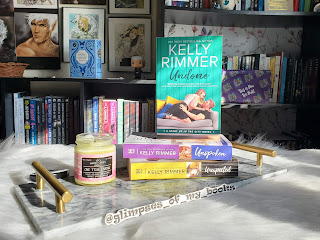 I wrote this review a few times and stopped. Why? Because I love Kelly Rimmer's books and yet, this just didn't work for me. It is such a horrible feeling having to sit down and write a not so positive review for a writer you love. Oh well... it needs to be done...


Blurb:
The only vow she’s ever been prepared to make is not to say “I do”Running a major tech company without breaking a sweat? No problem. But being bridesmaid at her best friend’s wedding is giving Jess Cohen a bad case of the jitters. Maybe that’s because she’ll have to face the groom’s brother, Jake—the man she’s been avoiding for the last two years. Jake, who Jess dumped mercilessly, unable to tell him the truth about her past. Jake, who’s loyal, loving and all wrong for someone who refuses to be tied down. If only Jess’s heart could remember that.Jake Winton spent four months secretly dating Jess, and the past two years trying—and failing—to forget her. He’d been ready to propose, convinced Jess was every bit as in love with him as he was with her. Now he’s sure their connection is still there, sizzling and undeniable. Whatever she’s holding back, he can handle—if only she’ll trust him with her secrets, her fears and her heart.

This will be brief. I don't like prolonging torture and this is torture to me. Undone had great potential but it didn't deal with trauma well. Although I understand Jess's reasons for being careful and scared she goes way too far. Her actions were confusing and hard to understand. In the end of the day, she used Jake like a dirty rag. There is really no polite way of describing her actions.
For a while that was ok, it hard to get over the things she went through. It is more than ok that she didn't want to get married, it is her life and her choice. It is more than ok that she didn't want to have kids and having him say he does scared her away. As awful as it was the way she first ended things with him, it was understandable. Everything after that was not. She used him, plain and simple. When I didn't feel like shouting at her I felt like putting the book down and giving up. The whole time I read this I was either angry or rolling my eyes in frustration and boredoom.

Jake's character was boring. There is nothing to him. He is Mr Nice Guy through and through and gets used and abused by Jess again and again. And he lets her of-course. The guy has no spine. And the ending? So unrealistic.

I will read whatever this fabulous writer comes out with next, she IS amazing. This sadly just wasn't my cup of tea...

Find the Book at: GoodReads