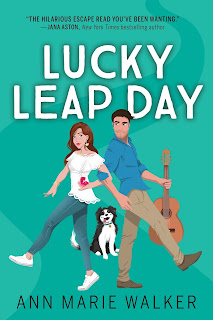 Did you know that in Ireland, every four years, when February 29th comes around ladies can propose to their lovers and the gentlemen must say yes? I had no idea Americans didn't know that until recently. Well, it is an old Irish tradition that makes for some fun stories to tell and in this case, a very well written romantic comedy.
Lucky Leap Day is the story of Cara, who after one too many whiskeys on Leap Day, proposes to her taxi driver - who also happens to be a musician in the Irish bar she ended up at during her last night in Ireland. She wakes up the morning after with a tin foil ring on her finger, a bad hangover, and a new husband. Because well, it was Leap Day, Finn could not reject such a proposal!
Cara has a flight in just a few hours that she cannot miss. The most important meeting of her career is waiting for her. So they do the most logical thing: Cara, Finn, and his dog, pack their bags and fly to the US. After all, it is much easier to annul a marriage if both parties are in the same country.
Once in the US Finn does the one thing Cara was not expecting, although he does not fight her looking for a way to get the annulment done, he also does not fight their attraction. Much the contrary, he spends his days going to auditions and his evenings charming his new wife. Are his feelings true or did Finn agree so fast to come to the US for Cara's connections?
The book is sweet and humorous. Cara and Finn are a delight to read, but so are all the secondary characters. Cara's landlady is a wonderful older lady and her friendship with Cara adds a much needed extra depth to the story.
As for my favorite part? The epilogue!!! Ever wondered what your dog is thinking? Well, wonder no more... Finn's dog is about to tell you exactly what he thinks about all that has come to pass!
Find the book at: Inklings Bookshop - Signed Copies
Also by Anne Marie Walker (and my favorite to date): Happy Singles day