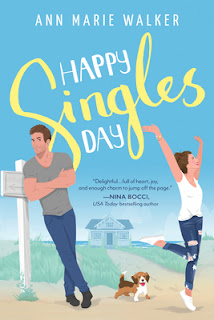 How do you feel about holiday reads? or small town/seaside novels? Happy Singles Day reminds me of the easy to read novels that came out every Christmas and of small town seaside novels.

Paige, a Certified Professional Organizer in Chicago has everything in her life in order. After one very bad experience with her ex and her old boss she started her own company and is very successful. But, she is in desperate need of a holiday. The perfect opportunity appears after she clicks on an ad for Happy Singles Day. What better time to go away? Because who needs  a man? Certainly not Paige.

Once Paige arrives at the small sea side town in the middle of nowhere she soon realizes things are not as they appeared on the website. For starters, there are no cars in town. She needs to get on a bike to get to the B&B. Once she does get to the B&B it looks like someone's house, with crap all over and definitely not set for the peaceful holiday week she was looking for. On top of that, the guy at the door is rude and unwelcoming. She turns back on her heel, and because she is lucky like that, a storm comes in. She has no choice but to return to the B&B and ask for a room back.

What Paige doesn't know is that the ad was set by Lucas (the moody guy at the door) sister's. Ever since his wife died and left him a single dad he has been struggling to keep the house afloat and has not taken any guests. When Paige arrived he had just found out about his sister's doing and although he is not happy about it, his sister is right. He has bills and taxes to pay, he needs to start using the B&B again. Though a little more warning from his sister so he could get the place cleaned up (since it is his house with his little daughter as well as a B&B) that would have been great. A rude 'city slicker' lady as a first guest back in operation did not help.

As their worlds collide and they are forced to spend time together Lucas finds Paige is not as obnoxious as he first thought. She is bossy and a little OCD, but she is also kind and sweet. And Paige finds Lucas is not that rude. Maybe at first, but mostly he is a man in pain with a little too much on his plate.

A storm, an animal rescue, and a sea shell expedition with Lucas' little girl later, and the chemistry between them becomes undeniable. But can two people from very different worlds be anything more than just friends?

Overall, a very sweet and clean romance read appropriate for all ages and tastes. If it wasn't for it having older characters, you could easily find this story in the Young Adult romance section. There is some humor, some drama, and a beautiful love story. So why not 5? Because I personally need my romance books to have a little more grit, a little more passion, a little more of a connection between the main characters.