March 04, 2019
Every now and than you get on the 'trend' train and regret it. This was one of those instances. For some reason a lot of people loved this book. I can't say I share the sentiment. It was not for me at all. As I often tell my friends on bookstagram: there is a book for everyone! 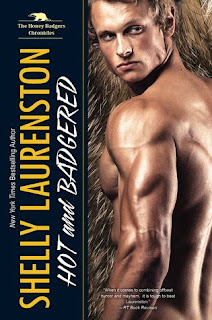 Blurb:
It’s not every day that a beautiful naked woman falls out of the sky and lands face-first on grizzly shifter Berg Dunn’s hotel balcony. Definitely they don’t usually hop up and demand his best gun. Berg gives the lady a grizzly-sized t-shirt and his cell phone, too, just on style points. And then she’s gone, taking his XXXL heart with her. By the time he figures out she’s a honey badger shifter, it’s too late.

Honey badgers are survivors. Brutal, vicious, ill-tempered survivors. Or maybe Charlie Taylor-MacKilligan is just pissed that her useless father is trying to get them all killed again, and won’t even tell her how. Protecting her little sisters has always been her job, and she’s not about to let some pesky giant grizzly protection specialist with a network of every shifter in Manhattan get in her way. Wait. He’s trying to help? Why would he want to do that? He’s cute enough that she just might let him tag along—that is, if he can keep up . . .

I had many problems with this book, but the main one is simply that when I pick a paranormal romance to read I want ROMANCE! I was 75% into the book before anything remotely close to be called a romance happened and it was a pathetic kiss that cannot in any way shape or form be described as romantic. Hot and Badgered is a paranormal book, but not a paranormal romance. And well... I don't read paranormal or fantasy just 'cause. I like and need romance in it.

The plot and main characters were crazy. I think all the crazy in the book is meant to be funny, but I really am struggling to see how anyone can find any of it entertaining. It was just crazy and immature and well... stupid. Now, don't get me wrong, the writing was actually ok otherwise I would not have manged to finish the book... but in the end it was overwhelming, confusing, way too weird, and with characters that are just impossible to relate. They had no substance. It was a lot of crazy for the sake of crazy.
The more I read the more disappointed I got.
You would think that as the book progressed things would start making sense as well but that was also not the case. The plot was very confusing.
And lets not forget that in addition to no romance there was no chemistry whatsoever between the supposed main characters. I say supposed because the crazy younger sister probably got more page time than the two main characters.

Anyway... I will stop here, you get the gist of it.
As I said, a lot of people liked it. So if you still wanna give it a go find the book at:
GoodReads
Amazon