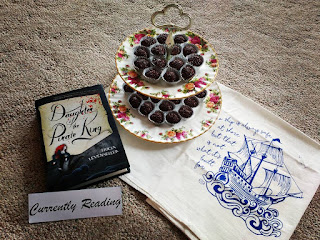 Daughter of the Pirate King was a surprise read for me, I knew nothing about the book until it arrived
in my house in the Owl Crate box for the month of march. And what a surprise it was! I am really excited to be sharing this review with you all. The book was fast paced (something I always like), full of adventure, suspense, a tad of romance, bravery, scheming, deceit... all you would expect from a book about pirates!

Sent on a mission to retrieve an ancient hidden map―the key to a legendary treasure trove―seventeen-year-old pirate captain Alosa deliberately allows herself to be captured by her enemies, giving her the perfect opportunity to search their ship.
More than a match for the ruthless pirate crew, Alosa has only one thing standing between her and the map: her captor, the unexpectedly clever and unfairly attractive first mate Riden. But not to worry, for Alosa has a few tricks up her sleeve, and no lone pirate can stop the Daughter of the Pirate King


Alosa, the main character is a pirate. She is clever, very strong and very determined to accomplish her mission on board of the enemy ship. She is also, as the title of the book gives away: the daughter of the pirate king.
As the book progresses we find out more about Alosa and learn therefore to see things the way she does. There is a lot in her past, specially between her and her father that is not pretty, yet she remains loyal to him. He is her father and she clearly loves him, for better or for worse...
Her character is also rather funny. She is very sure of herself. Or full of herself.... depending on ones point of view I suppose! But she is also a serious character and at times grave and sad. I saw a few people comparing her to Jack Sparrow, I don't think I can easily make the same comparison. Yes, Jack is full of himself, but he does not have the same seriousness, devotion to a person and sense of duty that Alosa does.

Riden and Draxen are both very good characters. They are brothers and they run the enemy ship. Draxen is greedy and ruthless. Riden is a little more merciful, but his loyalty to his brother doesn't always allow for that side of him to show. Riden is by far the cleverest character in the book. He learns a lot about Alosa simply by watching the way she carries herself.

There is some romance, but it is not prominent. The romance is also why although I am close to giving it a 5 stars rating I can't bring myself to do it. I loved all about it... until the ending. It was so vague. Yah, I get that there will be another book, but it is so obvious how they feel about each other that not just 'making it happen' made the ending rather boring. One kiss, one line, one tiny little anything between the two at the end would have turned a boring ending into something a little more exciting. Now I have this fear that the author did not do that in order to keep them apart in the next book, which will really anger me... hehe

Some of the other pirates in the enemy ship are also really fun to read. I have a suspicion that at least one of them  will have some very entertaining story in the next book.