April 02, 2019
Every once is a while you read a book that can be easily described with one word. This is one of those times. Realism was adorable. Everything about it put a smile on my face. 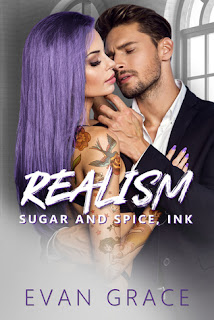 Blurb:
Ordinary, typical, conformed, are words never used to describe me. I’ve never been one to play by the rules. It’s my world, my life and I do things my way.

I see the way they stare at my body covered in tattoos and my lavender hair, I just don’t give a damn. There is only one thing in this world that can get me fired up, that’s screwing with my daughter. As a single mom, it’s my job to protect her, fight for her. She is and will always be my top priority.

So, when I get a call that she’s in trouble at school, with a boy- no less, my claws are out and ready to strike. And the boy’s father, some high society stockbroker, isn’t about to deter me. I don’t care how sexy, smart and rugged he is.
Opposites may attract, and I’ve been down that road before, it’s one I never plan to travel again. A man like that would never be interested in a woman like me. That I know for certain, after all I’m a realist.

Let's start by saying that I was really worried I wasn't going to like it. Why? Single dad or mum romance tropes are in between one of my least favorites. That being said, I did not have to worry. Evan made sure it all not just worked but that you fell in love with the kiddos as well as the main characters.

The chemistry between Mona and Joaquin was spot on. They worked wonderfully together. I for one think opposites attract so I loved how different they were. I think their differences made them better, they complemented each other.

Funnily enough (because as I said earlier I am not into kids on romance books) the kids were my favorite part. Their friendship to each other and Joaquin and Mona's relationship with their kids and each other's kids was truly special. They became a truly wonderful and beautiful family and I absolutely loved the little stories added at the end (months and years later).

Overall it was a fabulous story. Some parts had a little too much inner monologue and others were a tad too predictable. Also Joaquin's reaction to his attraction to Mona in the beginning wasn't great. But those were all  minor things and didn't make the story any less pleasurable.

Release Date: April 2nd, 2019
You can find the book at: GoodReads - Amazon