May 08, 2019
And Helena Hunting did it again! This fabulous author will never cease to amaze me.
The book was utterly adorable 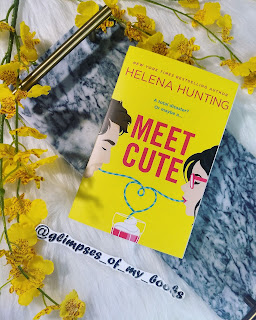 Blurb:
Talk about an embarrassing introduction. On her first day of law school, Kailyn ran - quite literally - into the actor she crushed on as a teenager, ending with him sprawled on top of her. Mortified to discover the Daxton Hughes was also a student in her class, her embarrassment over their meet-cute quickly turned into a friendship she never expected. Of course, she never saw his betrayal coming either...

Now, eight years later, Dax is in her office asking for legal advice. Despite her anger, Kailyn can't help feeling sorry for the devastated man who just became sole guardian to his thirteen-year-old sister. But when her boss gets wind of Kailyn's new celebrity client, there's even more at stake than Dax's custody issues: if she gets Dax to work at their firm, she'll be promoted to partner.

The more time Kailyn spends with Dax and his sister, the more she starts to feel like a family, and the more she realizes the chemistry they had all those years ago is as fresh as ever. But will they be able to forgive the mistakes of the past, or will one betrayal lead to another?

From the awkward way they first meet till the very end, both main characters kept me entertained! They had the perfect 'Meet Cute' moment that eventually turned into enchanting yet steamy moments between them.  There was nothing not to love about this two.
Although I did not find it to be the most hilarious romantic comedy it had enough humor and charm to be described as such.

“I think it’s interesting that you have a thing for the teenage version of me but you’re not all that fond of the real, adult version.”

My heart gave out for Daxton, becoming a parent overnight to a teen sister is definitely a daunting task. But he remained, or at least tried to remain strong through it all. His relationship with his sister was a huge part of the story and it made it all the sweeter. There was romance, friendship, and sibling love all in one.
Kailyn was also a great character. Steady and strong when both Dax and his sister needed most. And in the end, she made all the right choices.
Needless to say the chemistry between Dax and Kailyn was spot on. They understood and completed each other beautifully!