The Bride Test (The Kiss Quotient #2) by Helen Hoang

From the USA Today bestselling author of The Kiss Quotient comes a romantic novel about love that crosses international borders and all boundaries of the heart.. 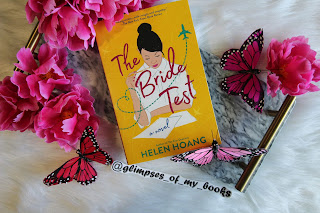 The blurb:
Khai Diep has no feelings. Well, he feels irritation when people move his things or contentment when ledgers balance down to the penny, but not big, important emotions—like grief. And love. He thinks he’s defective. His family knows better—that his autism means he just processes emotions differently. When he steadfastly avoids relationships, his mother takes matters into her own hands and returns to Vietnam to find him the perfect bride.

As a mixed-race girl living in the slums of Ho Chi Minh City, Esme Tran has always felt out of place. When the opportunity arises to come to America and meet a potential husband, she can’t turn it down, thinking this could be the break her family needs. Seducing Khai, however, doesn’t go as planned. Esme’s lessons in love seem to be working…but only on herself. She’s hopelessly smitten with a man who’s convinced he can never return her affection.

With Esme’s time in the United States dwindling, Khai is forced to understand he’s been wrong all along. And there’s more than one way to love.

The Bride Test was a fabulous read. I am very glad to say that the hype behind this book is 100% accurate. The story is funny, sexy, romantic, and original!

Khai's character was delightful and interesting. He is autistic and the way the writer portrays him makes him all the more captivating.
He has a good job, a daily routine, and enjoys the simple things in life. It is the big emotional stuff that he struggles with and to watch him grow and understand himself and those around him better was sweet and at times also hilarious.

Esme was at the right place at the right time. She is a little bit silly to start but her character grows on you as the story progresses. Her strength and determination soon start to show and you cannot help but admire her for it.

All that being said the book loses a point for me because of Esme's child. She is mentioned in the beginning of the book and again at the end. Khai meets the kid in the end for a whole 5 seconds and nothing else is said about it until the "4 yrs later" part. The whole single parent trope was unnecessary. I am not a huge fan of that particular trope as is, and when it is done poorly it is even worse. It is baffling that such an amazing writer and such an amazing book has also such a poor written trope within it.

All things considered, this was a fabulous read and I cannot recommend enough.
“With The Bride Test, Hoang has once again shown readers the importance of representation in literature, while also creating a sexy, compassionate story about the power of love and the enduring American Dream.”—The Washington Post
Find the Book at: GoodReads - Helen Hoang - Inklings Bookshop - Amazon