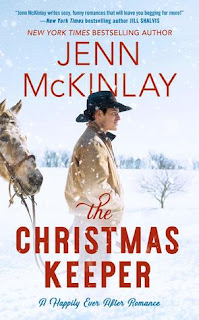 I adored the first book in this series, The Good Ones and I was looking forward to The Christmas Keeper. It wasn't as good as the first, but it still was a pleasurable read and perfect for Christmas!

All he wants for Christmas...
The second Joaquin Solis saw Savannah Wilson, he knew she was destined to be his wife. Unfortunately, Savannah's sights are set on a happily-ever-after of another kind: skewering the boss who got her fired. Until then, she won't act on the scorching sexual chemistry that is brewing between them, leaving Joaquin scrambling to find a way to capture her heart.

When the opportunity arises to use his ranch to boost Savannah's publicity career, Joaquin doesn't hesitate to invite her into his world at Shadow Pines and woo her with all of his Christmas loving mojo. It's a gamble since the holidays aren't really Savannah's thing and helping her might also mean losing her as she plans to shake the dust off of their quaint town in North Carolina and head back to New York City the first chance she gets.

But Joaquin believes in the magic of Christmas and he knows with a little help from his friends at the Happily Ever After Bookstore, he can convince the woman of his dreams that he's a keeper...

Savannah and Joaquin were likable characters from the first book already. He is a loyal friend to Ryder, hardworking, has some swagger, and of-course is drop dead gorgeous. Savannah is a loyal friend to Maisy and has been there for her every step of the way. She is not exactly in a good place in life right now but she still gives her all and her best to her friend.

This unlikely couple does work, they are good for each other. But as with most holiday romances the story is so light and fluffy that I found it hard to connect to the characters, to invest in their story.
I really don't have much else to say about it, it was a good holiday romance, just not one I will be reading again.