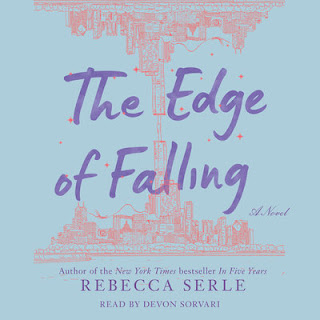 In Five Years by Rebecca Serle was easily one of my favorite reads last year and I was very excited to read this book by her. I am not 100% sure what the exactly release date was but I think the print book was released in 2014 and Simon and Schuster picked up in audio format this year. It was released (re-released?) February 2nd. I listened to this beauty on libro.fm pretty much in one sitting.

Sorrow can be seductive—but can hope triumph over heartbreak? A dark and searing novel from the New York Times bestselling author of In Five Years.

Caggie never wanted to be a hero, but some things are decided for us. Growing up among Manhattan’s social elite, Caggie always had everything a girl could want, including a storied last name. But after saving a girl from the brink of suicide, Caggie becomes infamous, and now all she wants is to be left alone.After all, she’s still reeling from the recent death of her younger sister, the subsequent destruction of her relationship with high school boyfriend, Trevor, and the way in which her family has since fallen apart.So when mysterious Astor appears on the Upper East Side, he just might be the rescue she needs. But what is he hiding? As life as she knew it begins to unravel, Caggie realizes Astor’s past may be as dark as her own. And in a world in which she’s been branded a hero, Caggie will soon discover that no one can rescue you…not until you save yourself.

The Edge of Falling is one of those contemporary young adult books that works for just about everyone.

Caggie has a good and privileged life, but losing her sister has changed her. The Edge of Falling gives the reader front row seat to what can happen in a teens (or anyone's) mind when dealing with grief. To make things worse, as she spirals an incident is misunderstood and now Caggie is famous for something she did not do. Much the contrary, she is famous for a moment in her life when someone else should be getting the glory. Guilt over that moment, guilt over her sister's death, grief, and the growing distancing from her friends, boyfriend, and family push her into the arms of a newcomer. Astor understands her pain. He doesn't question it and he doesn't try to change her. He welcomes the darkness in her. But is that a good thing? And that is the question you keep asking yourself as the book progresses.

I wouldn't say this is the best book on grief ever written, but it has a good story and it deals with some very serious issues rather well.