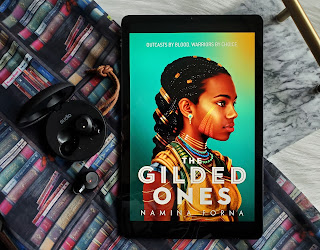 There was a time where I loved nothing more than a good YA fantasy. I guess that time is passed... either that or the quality of YA books coming out has fallen. This wasn't a bad book, it just was underwhelming. It has a very good concept, a good start, a good climax point, but everything else felt flat.

Deka leaves in fear of the Blood Ceremony Day- the day she finds out if her blood runs pure (red) or if she has gold blood, which is met with a death sentence. Needless to say, her blood runs gold. She is killed again and again just to wake, limbs reattaching themselves... It is a gory and interesting start. I was intrigued as to what she was and where this was going.

Someone from the capital comes an offers her a deal: fight for the emperor with other girls like her or stay at the village being killed until someone figures out how to give her her true death. Let's face it, it is an easy choice.

The book celebrates female friendships, sisterhood! Families from circumstance and choice rather than blood. Being different, being original, being unique! And that, I loved. It was done well and a joy to read.

On the other hand, the book also dealt with women being treated as less, race, African mythology... and those themes were not done well at all. Most of the time I was rolling my eyes and bored to death. I am women and a women of color at that, but there is nothing that annoys me more than a book being popular because it has or celebrates POC characters and than is not done well. I rather only read white characters/authors than average books?! #sorrynotsorry

The mythological aspects weren't explored or explained enough. The audio book (at the speed I was listening too) was 7 hours long and for at least 5 of those nothing much happened- Deka trains to be a soldier and finds she is stronger than the others with a special ability- there is the summary for you, fun hey? I still don't know much about the demon/woman creatures, their goddesses, etc. What am I talking about when I say women/demon creatures? good question, and my point exactly. I'm afraid I can't really answer that as it is not explained all that well. The plot was slow an fell flat.

Women are treated terribly in this book, and yet, half way through the book Deka is said to be forgetting all that she experienced. Including her many deaths. Say what? If you are going to write heavy social issues like that write well or not at all. There were other instances were things were just forgotten or put aside. It was weird and left the book with a lot of plot holes.

This book is the reason I prefer to stay way from titles that get promoted solely for being written by POC authors, dealing with social issues, and/or having POC characters. I want GOOD stories, regardless of who wrote them. I am of the opinion that one does more damage to the community they want to support than good when average books get hyped up because of outside issues.

All that being said, my main issue with the book truly was that the plot and characters felt flat. I could have ignored all the social issues mishandling if the plot and character built had been done well. The book felt really long and for the most of it nothing important happened. I didn't connect with any character because we did not get to know any well. I didn't submerge myself in a wonderful new world because we didn't get to know enough about it... A book so long could have done better.

The saving grace was the sisterhood and the friendships. The way the bond between women was celebrated! But that is not enough to make me want to read the next book or recommend this one. But hey, each to their own.

If you want to give it a try, find the book at: Libro.fm - Inklings Bookshop - GoodReads