The Rogue of Fifth Avenue (Uptown Girls #1) by Joanna Shupe 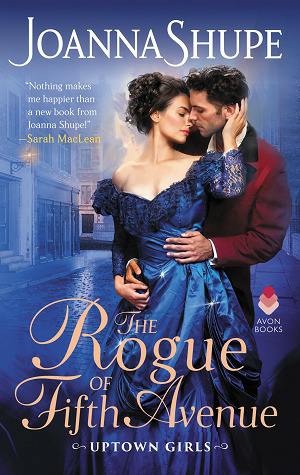 The Rogue of fifth Avenue truly was a delightful read. I was entertained and captivated by it from begining to end.
Often historical romances feel rather long and can get a tad boring in the middle. This one was actually a rather fast read.
Frank Tripp worked hard to get where he is in his life.Someone from his background
(which the keeps hidden at all costs) does not become a lawyer for the upper class easily. Duncan Greene, one of his most powerful clients could destroy him easily.
So it is in his best interest to Keep Duncan's daughter safe as he finds her in male stablishments only (such as casinos) way past a ladies bedtime. Again and again he has to escort Miss Greene back home. He doesn't tell her father of her excursions though... he rather likes sparing with her.
Mamie is a spitfire of a lady. She does what she wants, when she wants, and Frank Tripp is not going to get in the way- either by protecting her when she does not need protection, or by telling her father of her outings. She is to marry soon, to a man her father promised her to long ago.
She has to help others and do the most she can now.
As the two get to know each other it becames quickly obvious that they are attracted to each other. The question is who is seducing who and will all this seducing backfire?
I really enjoyed the banter and the time they spent together. Tripp's character specially was rather touching and it was wonderful to see him grow and become a better man.
Go read!
Find the book at: Inklings Bookshop