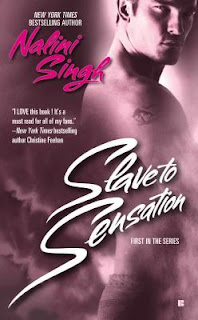 I started this series somewhat backwards. Silver Silence is the first book in a spin-off series for Psy-
Changeling and was the first book I've read. But, being a spin-off, it is also book 16 in the series! It was also my first book by Nalini Singh, who has since than become one of my all time favorite paranormal romance writers.

I've been meaning to go and read her older books it is been a while, but you readers know how it goes: the TBR is never ending. It took 2 years but here we are. I own almost the whole series and I will eventually get through them.

To start, this book very much reminded me of Silver Silence. A psy and a shifter. But as the story progressed it took a life of its own. My favorite thing about it is that Nalini somehow managed to create a whole new world without making the book unnecessarily long. Rather often the first book in a new paranormal/fantasy series is long in order to explain the new world created. I felt she did that nicely and timely throughout the book in between the many heartfelt moments.

Before we get to the main event: the lead characters, I gotta say I loved all the side characters. A lot of love and care was put in writing them. I have a huge soft spot for shifters- their alphaness, their sense of  loyalty, family, of love... and all of it was beautifully written. My only complaint is that I now want a group of loyal friends like that around me. I mean, I have them, but they are all so far (having moved countries 4 times does that).

Sascha is our main girl. She is a psy, psy are meant to have no emotions, no anger, no love, no pain, nothing. But Sascha, she feels things, things she doesn't understand and knows she will be punished if the other psys ever find out.

Girls are dying, being found murdered. And Lucas knows it is a psy doing it. Makes no sense, they are not meant to feel anything, but the scent is undistinguishable. It is a psy.

Sascha believes she is broken and soon going to either be put to death or have her mind turn into mush by the psy when they figure out her faults. But if she can save one life before she dies, she will most certainly try. And if she can feel thigs while doing it, more specifically Lucas, why not?