September 26, 2019
Do you remember when cheesy vampire books were popular in the Young Adult world? Well, I don't know if Renee Ahdieh will successfully bring that back or not, but that is exactly what this book was! 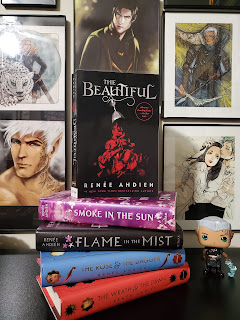 No matter where she went, danger followed.
And it horrified her. Just as it thrilled her.

In 1872, New Orleans is a city ruled by the dead. But to seventeen-year-old Celine Rousseau, New Orleans provides her a refuge after she's forced to flee her life as a dressmaker in Paris. Taken in by the sisters of the Ursuline convent along with six other girls, Celine quickly becomes enamored with the vibrant city from the music to the food to the soirées and—especially—to the danger. She soon becomes embroiled in the city's glitzy underworld, known as La Cour des Lions, after catching the eye of the group's leader, the enigmatic Sébastien Saint Germain. When the body of one of the girls from the convent is found in the lair of La Cour des Lions, Celine battles her attraction to him and suspicions about Sébastien's guilt along with the shame of her own horrible secret.

When more bodies are discovered, each crime more gruesome than the last, Celine and New Orleans become gripped by the terror of a serial killer on the loose—one Celine is sure has set her in his sights . . . and who may even be the young man who has stolen her heart. As the murders continue to go unsolved, Celine takes matters into her own hands and soon uncovers something even more shocking: an age-old feud from the darkest creatures of the underworld reveals a truth about Celine she always suspected simmered just beneath the surface.

At once a sultry romance and a thrilling murder mystery, master storyteller Renée Ahdieh embarks on her most potent fantasy series yet: The Beautiful.

This was and will be for you reading this, a 'take it or leave it' kind of book, 'love it or hate it'... there really is no other way when it comes to cheesy vampire books. Think of twilight and how divided people are over that series. By the reviews I have seen around the very same will be true here.

Really it boils down to two questions:
1- Do you like cheesy young adult vampire books? (emphasis on young adult please!)
2- If you have read Renee's previous books, did you like? The somewhat poetic and lyrical writing she has is evident here too.
If the answer to one or both these questions is no, don't read it. If it is yes, than you will love the book.

I will approach this review a little different. I will give you a negative someone posted about it and expand on that, shedding a positive light on it -for the most part.

- it is slow - well, yes and no. This goes back to question 2. It is the way she writes. Laini Taylor, Rin Chupeco, Maggie Stiefvater... all these ladies write very different stories but because of their somewhat poetic style of writing get often condemn for having a slow paced books. So yah, it is a true comment, but it is not as straightforward as that either.

- the police detective is a teenager - again true. And this goes back to question 1 and the emphasis on Young Adult comment. Vampires have always been popular in the adult world and still are, and they are very very different than what you will find in young adult books, in YA often everyone looks rather young. Take it or leave it.

- rip off of other series - haha, yes and no again? Did I have Twilight vibes all the way through and specially towards the end? sure thing. But that doesn't make the book a rip off of that or other series. It merely means it is a book with an overused theme. We could say every book with a female assassin is a rip off of Throne of Glass if we were to proceed with that line of thinking.

- hints at a love triangle - have you read an YA without it recently? come on now, if you read YA you gotta be used to it. If YA had a trademark I would claim it to be love triangles. I don't like them, but they are in almost every YA book.

Anyway.. I could keep on going here for quite sometime. The reality of it is that this is a great book but with an over used theme and unless you like that particular theme you will be wasting your time reading it. I am a mood reader and provided I am in a mood for a cheesy read when I grab one I always end up liking it.

Celine was a brave snow flake and I loved her attitude. Starting again in a new place and new country is rather courageous. On top of that her personality was infectious. Her sense of adventure and her curious mind captivated me.

Bastien was a hard nut to crack. You don't know much about him in the end of the book but it is hard not to be captivated by him. I rather liked his mysterious personality and that is very typical of vampire novels.

My favorite characters however were the side characters. Celine's friends were a delight. Both the quite and reserved Pippa and the very 'out there' Odette were delightful. Michael and his grandma were also fabulous. I loved the old ladies wit and sharpness. Michael was sweet and caring while also being rather bossy. I mean, he is the police detective after all :)

All in all this was a great story and a great book. But it will NOT be for everyone.