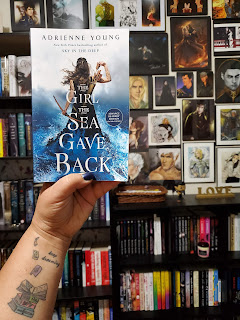 Blurb:
For as long as she can remember, Tova has lived among the Svell, the people who found her washed ashore as a child and use her for her gift as a Truthtongue. Her own home and clan are long-faded memories, but the sacred symbols and staves inked over every inch of her skin mark her as one who can cast the rune stones and see into the future. She has found a fragile place among those who fear her, but when two clans to the east bury their age-old blood feud and join together as one, her world is dangerously close to collapse.

For the first time in generations, the leaders of the Svell are divided. Should they maintain peace or go to war with the allied clans to protect their newfound power? And when their chieftain looks to Tova to cast the stones, she sets into motion a series of events that will not only change the landscape of the mainland forever but will give her something she believed she could never have again—a home.

I don't think anyone likes writing negative reviews, I certainly don't. That being said I am a strong believer that they are needed. I read many books because of negative reviews. What one person doesn't like might just work for another.

The single positive: She is still a very good writer. Everything had this lyrical and almost poetic feel to it.

The negatives: Everything else? I am kidding... but not really...
- the POVs are rather similar. At the beginning it was hard to distinguish between them. That in turn made them both rather boring.
- there wasn't much of a plot. It was a maddening slow paced book and in the end you can summarize the book in one paragraph (or less even): The were clans on the verge of war, than they fought  One lost and of-course one won but with the help of a third clan because the snow flake in the book was related to them. The end. Oh sh**, forgot... there was some magic. Future reading....sort of.
- information dump. There are a lot of weird clan names and people mentioned. The sort of thing you would expect on the first book of a long paranormal or fantasy series and not the sort of thing you want on a stand alone. Why? because it takes away important pages needed to develop a story.
- this is suppose to be a companion to Sky in the Deep. Say What?! you cannot compare this to that at all. They are two completely different things. At times it felt like two very different authors even. This does a disservice to anyone that has not yet read Sky in the Deep and might not give it a try now- please do, that book was amazing!
-  the ending was... I don't even know how to describe it. I guess it was meant to be romantic?! it really wasn't. I closed the book completely lost as to what that was suppose to mean. It really could mean a thousand different things... I guess everyone is assuming it means the two main characters will end up together but since NOTHING happened between them in the book I find that rather presumptuous and ridiculous.

I will stop now... I think you all get my point.