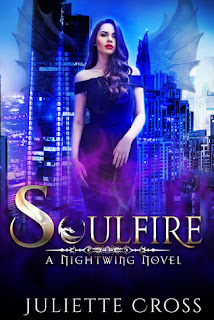 Every now and than we all discover new authors that we can't help but love. Juliette Cross has been this author for me this year. I have absolutely loved everything I have read from her so far. This was no different!
I guess it helps her books have my biggest PNR weaknesses: dragons (shifters or hybrids my usual go to) and demons.

About a month ago I read and reviewed her latest new release Darkest Heart and I thought for sure that would be my favorite work by her. It was paranormal romance, but it also had depth.
Soulfire is nothing like Darkest Heart. It is just a feel good PNR! And I LOVED it for it! My brain wants me to sit here and say I preferred Darkest Heart, there is 'more' to it. A grittiness you won't find in Soulfire. But my heart sings Soulfire! Can't help it... It was such an easy breezy lovely read about two souls from two different worlds that just are meant to be.
*SWOON*
Than swoon some more...hehe

The Blurb (better late than never 🤣):
In a world divided by prejudice and hatred, only love can bridge the chasm.Tensions are rising in the Gladium Province. The boundary between humans and Morgons has begun to blur. While the human aristocracy strives to maintain distance between their daughters and the dragon-hybrid race, fate has other plans.As the daughter of the corporate king, Jessen Cade is duty-bound to honor her arranged marriage to a man she detests. Feeling trapped by family duty and a loveless future, she longs for more, straying to the Morgon side of the city.Lucius Nightwing is the eldest son of the powerful Morgon clan, and the greatest enemy of Jessen’s father. When a bar-room brawl thrusts Jessen into his arms, his dragon roars to the surface, craving to sate his carnal hunger in the brown-eyed beauty. The beast in Lucius recognizes her as his own, even if the man refuses to admit the truth.

What else can I say about it? Lets see... Lucius! He had me at hello.
Lucius is danger itself. Unless you want to be dead it is really for the best not to provoke the guy. And yet, he also had a vulnerable side that will give you a case of butterflies!
Jessen is feisty and doesn't agree with the prejudice of her world. She was likable and the kind of character you want to be friends with instantly.

Needless to say, I think you should all go and read Soulfire!
5 million beautiful stars to the beautiful Juliette who is slowly but SURELY becoming one of my all time favorite PNR writers!