January 05, 2017
I read this book October last year and fell in love with it! The story, the writing, the futuristic world in

which it is set, the book cover... Seriously, it is the prettiest glittery book there is!
I started posting reviews on a blog (instead of only on my bookstagram) about a week after I finished reading The Thousandth Floor, so it never got here. But I love the book and I think it is worth more than just a few little lines on Instagram.
How much I love it? Well... here is a little background story for you guys: I found out there would be a book fair about 3 1/2 hours away from me in the Twin Cities, MN and decided to check out the authors that would be there (not worth going for books you would never read right?!). I wasn't really familiar with many of the authors so I looked up the books and their synopsis instead to see if anything sounded interesting. The Thousandth Floor, although not my usual 'go to' style of book (I am rather a fan of fantasy) sounded really good. Next day, on a trip to Target, there was the book! I couldn't resist! I finished reading the book in 2-3 days and made the immediate decision that I had to meet the author. The book was awesome! 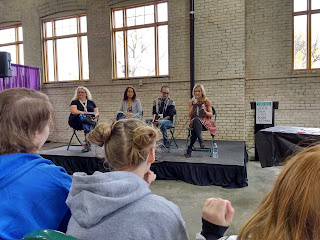 I met the author Katharine McGee (far right) at the St Paul's book fair about 2 weeks after reading the book. And I am not kidding or exaggerating when I say I only drove those 3 1/2 hours because I wanted The Thousandth Floor signed! (I know...I sound like a teen fan right now... what can I say, 30 year olds also have idols! haha).
Not just the book was an amazing read, as it turns out, the author is really lovely herself! I am very glad to have met her. Books that you love become all that more precious to you if the author happens to be someone super nice too! 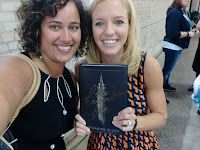 Book review time!
Although this is Katharine McGee's debut novel, you wouldn't know that was the case while reading it. She is very talented and her style of writing captivates you immediately. You are going to be intrigued by the story from the very first page:
"The higher you are, the higher you will fall"

"He didn't know whether she'd fallen, or been pushed, or whether- crushed by the weight of unspoken secrets- she'd decide to jump"

That is more or less how the book starts, and trust me, you are unlikely to guess how the events will unfold. A lot happens!
The book is set in 2118 on a high tower- hence the name! Each floor is fully operational, like whole neighborhoods. And the higher you are, the richer! There is little reason to ever leave the tower since you can find all you need there. The book is very futuristic, there aren't phones/mobiles, rather there are eye contacts that let you see your messages. Why keys when you can use retina scanners?
The world building is done really well. I myself would love to live in that world!
The Thousandth Floor is written from the perspective of 5 different teens:
Avery, who leaves in the thousandth floor and is therefore the richest and most popular of the characters. She is also genetically design to be perfect. But she wants the only thing she can't have...
Leda is best friends with Avery. She has two secret addictions though, one that will forever damage her friendship with Avery.
Eris is another girl from the higher floors and also friends with Avery. I believe her character is one of the most interesting ones in the book. It is the one that changes/learns the most. She is a carefree girl that has her life turned upside down when some of her family secrets surface.
Rylin lives on the 32nd floor (if memory does not fail me). She is poor and struggles with her sister. But a job in the higher floor and a boyfriend that deals drugs changes her life.
And than we have Watt (where my soft spot is at). He is the sweetest of the characters and I really hope to read a lot more of him on the next book. I was rather sad with the way things ended for him.
He is a tech genius who lives on the 240th floor and does some illegal work in order to help his family financially. All is well until he is hired by one of the higher up girls to spy on someone else.

There are some awesome minor characters as well. One of my favorite of those is Cord. He lives in the higher floors and as expected is friends with Avery, Leda and Eris. He also develops a friendship with Rylin. Their story is intriguing and I am looking forward to see what comes next. I don't really see him as a minor character though, he has potential to be a lot more!

The book is reviewed often as a futuristic version of Gossip Girl. I am not myself a fan of Gossip Girl, so I will argue that this is a lot better. Yes, there is drama, but is not drama that makes you cringe because of how cheesy and obvious it is. The thousandth floor has a much more sophisticated and intellectual writing style than Gossip Girl ever did.

The ending begs for a sequel! And even though you kind of know how it will end due to how the book started, it still manages to be unexpected and exciting.