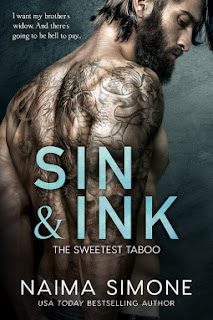 Holly Mother of Smut!
This book was hot hot hot
I mean... a lot of the romance books I read have sex and smut and all that. But Sin and Ink was off the charts hot. This is definitely erotica so make sure you comfortable with that before diving in.

The blurb:
There's sin, and then there's literally going-straight-to-hell sin...

Being in lust with my dead brother's wife pretty much guarantees that one day I'll be the devil's bitch. But Eden Gordon works with me, so it's getting harder and harder to stay away. I promised my family—and him—I would, though.

My days as an MMA champion are behind me. But whenever I see her, with those wicked curves and soft mouth created for dirty deeds, it's a knock-down fight to just maintain my distance. "Hard Knox" becomes more than just the name of my tattoo shop. However, surrendering to the forbidden might be worth losing everything...

The chemistry between the main characters is obvious from the very first pages. But don't be fooled to think that is all there is to it. The book is also emotionally intense.

Yes, you will need cold water, maybe even some ice and a fresh pair of underwear... but you will also need tissues. And tons of it. This short little book packs a punch!

Knox is a retired MMA fighter running a successful business but also carrying around with him an immense amount of guilt and pain. His brother died after a fight and he blames himself. He also feels guilty because of his feelings for his brother's wife. He was there for her when she needed a shoulder to cry on but as the years past his feelings for her did not diminished. If anything they got stronger.

All in all this was a beautiful book. The story was intense and written beautifully. The fact that it will make you hot and bothered is just an added bonus really :)

The only reason I am not giving it a 5 start but 4.5 is that it at times it was a little bit repetitive. That usually annoys me a lot on books but this was so intense and sexy I found that I did not care one bit!