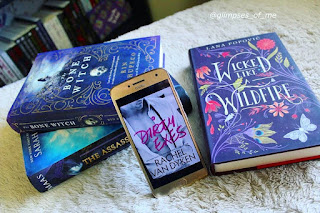 I read this book in one sitting while on the plane on my way to New York (BookCon, post on that coming soon).


It follows the story of Blaire, a PI focused on exposing the cheaters of the world. She is good at it too.
Her new assignment however is on an old friend and flame, the boy from her dreams that left her in order to pursuit his football career. To treat him like any other client proves difficult, she loved him once and is still attracted to him. Luckily for her his best friend is willing to help her out a little. He is funny and friendly and she is captivated by him from the start. As he is with her... One impossible job, two men she is attracted to, a cheater to be exposed...

I  loved this book!
I laughed and got goosebumps often.
Blaire was a hilarious character. Some of the situations she found herself in while doing her job where priceless. From the first to the last page she did not fail to make me smile.

Jessie, her ex, has a complicated life. Married but not married. It was hard to understand the guy and why he put up with the things he did. He cares a lot about Blaire but he also needs to get his affairs in order and that does not happen until the very end.

Collin, Jessies' best friend was a hoot. Everytime he talked I laughed. And the chemistry between him and Blaire was off the charts.