A Case of Serendipity by K.J. Farnham

October 16, 2018
Hello sunnies! The lovely K.J Farnham send me a copy of this book and I dove into it as soon as I could. Funny story: I had to google serendipity before hand! 😉
In case I am not alone: "the occurrence and development of events by chance in a happy or beneficial way"
I gotta say...clever title! 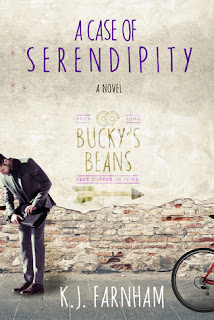 Ruth Bateman is at her wit’s end. If Bucky’s Beans doesn’t stop spamming her phone with discount codes for frou-frou java concoctions, she’s going to flip. After multiple failed attempts to unsubscribe, Ruth takes to the company’s Facebook page to vent her frustration over the never-ending texts.

When attorney, Henry Mancuso, stumbles upon Ruth’s complaint, he has no idea that a simple Facebook scroll is going to change his life. Now, he has to get Ruth to agree to a class action lawsuit when she’s just looking for some peace on her mobile device—not a drawn-out case against a coffeehouse giant.

As Ruth and Henry battle the legal waters, a friendship full of fun and spontaneity blooms. But could something more be brewing between these two and this coffeehouse case?

Overall I think the book had a cute and fun set up and a very charming romance.
As the title suggests Ruth and Henry's paths cross by chance and they continue to bump into each other by chance afterwards too. They were perfect for each other in every way and I was rooting for them from the beginning.
Ruth was a quirky character I would love to have as a friend in real life. She felt real and that is always a plus!
Henry also felt very real. He was the perfect example of a workaholic and I couldn't help but laugh every time Ruth found a way to lightly poke at him for it.
They are both kind-hearted people that deserved the love they found. Everything about them being together made sense. The humour and banter between them was flawlessly written as well and I looked forward to every dialogue/email between them.
I said it before and I will again: K.J. Farnham is a great writer!

As much as I enjoyed their love story though there were negatives: It moved at a turtle's pace; it was very slow. Things got repeated a lot (specially about the case against the coffee house) and the romance didn't get anywhere until about 50% into the book. It often felt like the romance was secondary to the court case and that frustrated me. But, the second half of the book was a lot better than the first so it ended in a very good note.
Go Read!