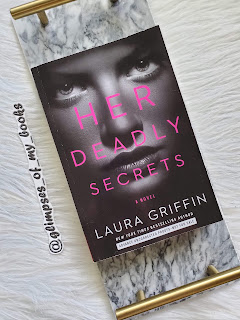 I don't read romantic suspense often, but when I do, I always enjoy it. Her Deadly Secrets kept me entertained and curious about where the story was going next. What else could I ask for? :)


Blurb:
Private Investigator Kira Vance spends her days navigating the intricate labyrinth of Houston’s legal world, and she knows all of its shadowy players and dark secrets.On a seemingly normal day, she’s delivering a report to her top client when suddenly everything goes sideways and the meeting ends in a bloodbath. Twenty-four hours later, the police have no suspects but one thing is clear: a killer has Kira in his sights.Fiercely independent, Kira doesn’t expect—or want—help from anyone, least of all an unscrupulous lawyer and his elite security team. Instead, she launches her own investigation, hoping to uncover the answers that have eluded the police. But as Kira’s hunt for clues becomes more and more perilous, she realizes that she alone may hold the key to finding a vicious murderer. And she knows she must take help wherever she can find it if she wants to stay alive.

I liked all characters. They all had their charm and were likable for different reasons.
Kira was head strong, very intelligent. Jeremy the same. They fit perfectly.

The suspense part of the book was really well written. It is a story that has been told a million times before in a million different ways and that will never cease to captivate when done well. Kira is in trouble, security firm to the rescue. Girl falls for bodyguard while afraid for her life.
The problem to me was twofold: the lack of chemistry, and that although the characters were likable you end the book without knowing much about them. Their relationship and the romance is rather superficial. The focus of the book is on the murder mystery going on.
I would shelve this book in the mystery/suspense section on the store and not romance. And since I am a romance reader, that is not the ideal...