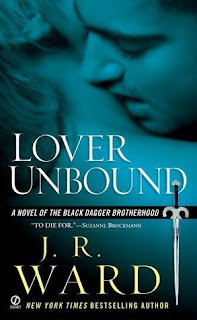 I have not posted a review for a book published this many years ago in a while, and I was almost not going to... but I need to rant. I love V and his book was lacking in so many levels...


The ruthless and brilliant brother Vishous possesses a destructive curse and a frightening ability to see the future. As a member of the Brotherhood, he has no interest in love or emotion, only the battle with the Lessening Society. But when a mortal injury puts him in the care of a human surgeon, Dr. Jane Whitcomb compels him to reveal his inner pain and taste true pleasure for the first time-until a destiny he didn't choose takes him into a future that does not include her...


I love V. So the first problem here is that the book focused on everyone else more than him. Was this really V's book?! At times it felt like it was John's. I like his character a lot, but his chapters eclipsed everything else.

V and Jane's relationship was doomed to fail before it even started.
V  was very  much still in love with Butch, that is OBVIOUS. And because of his b**** of a mother  he was also tied to someone else.
I get that in pnr there is such a thing as mate and insta love, and I LOVE that. But here that was just wrong because, as I said, he was still in love with Butch.  Even predestined love stories (such as are most pnr ones) need to make sense. This didn't. In one page he is head over heels for Butch, in the next he isn't. WTF?

The ending.... f*** my life... I don't mind ghosts, everything goes in pnr. But wtf? that was creepy... I just step through you... didn't see you there... no biggies... *face palm* JR Ward made certain we knew how messed up his upbringing was and than gave him that ending? he deserved better.
I actually like Jane, she is fierce, good at what she does, sees all of him... he deserved all of her.
The intimate scenes were off too. We all know V is into some hardcore stuff. I don't like that kind of thing but was willing to put up with it because I like V's character. Well... there was really none of it. One scene where he lets Jane take the lead but that was weird, that is not who he is. Part of him maybe, I get why Ward wrote that scene, but we needed to see him at his element too, and that didn't happen.

What else?! Phury... What on earth? I really liked him till now. Did Ward really need to write him like that? It got a little better towards the end but still... At least she didn't mess up Z and Wrath I guess...

And what happened to the Omega and the lessers? I don't like their chapters but she wrote so many of them in the previous books they are now part of the story. Completely removing them made V's book almost superfluous.

In the end I felt like V's story was a side story to everyone else's. Almost as if JR Ward couldn't be bothered with it (which I guess might be true since it is clear her true intentions where for Butch, V, and Marissa to be a thing and Jane not to exist). Anyway... Do I still like V? hell yah I do. But will I ever read his book again? No chance in hell.