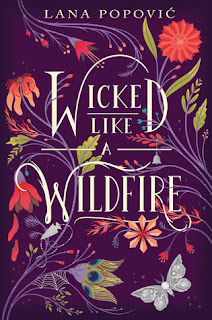 Wicked like a wildfire revolves around twin sisters Iris and Lina, brought up by their single mother.
They have magic, or 'gleam' as they call it for the most part. All the woman in their bloodline can manipulate beauty.
Their mother makes them hide theirs because of a curse. But one day she is struck down and the girls must now go and find out the truth and a way to bring their mother back.

I am going to be honest and say that even when I read the blurb I was already thinking it sounded far to generic. Change the 'gleam' for a different sort of power, twin sisters to just sisters or friends, and there is a long list of books that follow that exact same story.
That in itself is not bad, 'common stories' are popular because they work. People like them. I like them...

Wicked like a wildfire is one of those books that is, as the saying goes, 'neither here nor there' for me. It was nice, but there was nothing special about it.
The main characters were sweet and entertaining enough. The girl's heritage was a nice touch, but nothing was enough to make the book stand out.

There were a few plot twists. The first ones were predictable and deserved all the 'eye rolls' that happened while I was reading it, some of the later ones were a little better. The ending itself however was predictable.

The world building and setting was also a hit or miss. The folklore was really interesting, as was the Montenegro setting. But the places they go towards the end are a big blank in my mind.

I felt the pace of the book was slow...but I finished it in two days...
So you see... all in all the vibe throughout the book on all aspects is the same: Inconsequential. Average.