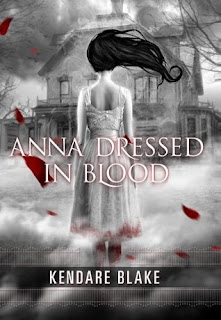 Kendare Blake is the author of Three Dark Crowns and One Dark Throne, books I have come to truly enjoy, so I decided to give this a go. Sadly the book didn't do much for me. Similarly to Wicked like a Wildfire I find this neither good or bad. It has an interesting enough story, it just doesn't excite in any way.

It was well written, had a good pace, a good enough story line.

First we have Cas, a ghost hunter of sorts. His father would kill murderous ghosts and after he was brutally murdered by one the ghosts Cas took up the job upon himself.
I didn't like him much to start with, very full of himself. But as the story progressed he became the most appealing thing in the book.

Then we have Anna, the ghost. She is this terrifying thing that kills everyone that gets anywhere near her house. Anyone but Cas of-course. She is scary for a whole 5 minutes. After that she is just boring. Not bad, just dull.
It is never explained why she doesn't have the urge to kill Cas, I personally believe that to be a mistake from the author. But than, would that have made the book any more appealing? probably not.

The romance was... humm... dull! uneventful! boring!
Once again, not bad, just lacking in passion, in excitement, in enthusiasm! It was all so 'one note'.

In conclusion, a good book. Just not a book I will remember anymore in a month's time!