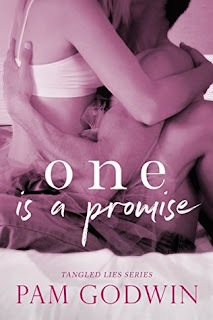 I don't really know what to say...

I really liked the story-line and the book was very well written. When it ended -well, when I thought it should have ended- it was perfect. The perfect HEA (happily ever after).
Trace was perfection! I love bad boys (in books) and he was the best arrogant, rude, self centered bad boy there is. Hot hot hot 😃 He also loved intensively and passionately. He helped her move on, he helped her let go of her dead fiance. Most importantly, he did not push. He wanted her, but he never pushed. He waited till she was ready. He was pure perfection!
But then... then the author messed it all up in the last 5 or so pages. I HATED the ending. Because of the book blurb I knew it was coming (I removed the last lines from the blurb for you guys since it is a massive spoiler), but that didn't make it any less surprising and infuriating.

It always amazes me how a 5 star book can turn into something you never want to read again because of the last few pages... and when that happens, I struggle to give it a rating.

Here is the blurb for the book:

One promise.
One forever.
One look and I knew Cole was mine. My dark rebel in leather. My powerhouse of passion, devastating smiles, and impulsiveness.
When his job sends him overseas, he promises to return to me.
A promise that’s destroyed in the most irrevocable way.
Two years later, an arrogant suit invades my heartbroken loneliness.
Clean-cut and stern, Trace is everything Cole wasn’t.
At first, he’s a job that will rescue my dance company. But as he intrudes on my life, our hostile relationship evolves.
He knows I’m still in love with Cole (who is dead), but his dedication is my undoing.


BOOK TWO AND SPOILERS:
The next book, Two is a lie, starts where One is a promise left off. I read a few pages here and there and than the ending out of curiosity. But I will not be reading the book in full or the conclusion to the trilogy. I despise love triangles and this one in particular just gets me angry.
She basically dates both of them at the same time.
Trace gives her space, again! He waited three years after Cole disappeared to even talk to her, he thought he was possibly dead too. And now again he gives her what she needs (or tries to, she is b***). He holds her but does not f*** her, treats her with respect.
Cole cannot be in the same room as her without wanting her in bed. It is clear, at least to me, which man is more deserving. But then, to perfectly honest, I think Trace deserves better than Danni!
And if that wasn't enough, in the end we find out Cole even cheated.
In a way she did too (I say in a way because they knew she was seeing both of them), but NO. This is just wrong.
Love triangles are stupid!
In YA books I can tolerate them, there is usually a sweet innocence to them, usually there is no cheating, no sex (being geared to teens and all). But in NA's I most often than not despise it!
1 star for Two is a Lie?!
Sorry folks... just not for me.