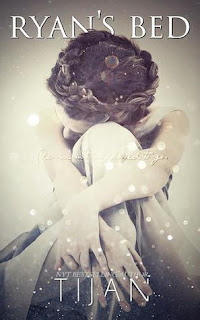 WOW! There are no words to describe how amazing this book was...PERFECTION 💗
I cried at page 8, I cried again around page 50, and again and again many times later... and here is the thing: I am not a crier. Specially not a book crier. Tijan opened my chest, saw my heart, grabbed it, squeezed it, and than squeezed it again. Ryan's Bed was a masterpiece!

Mackenzie is broken, her twin sister just killed herself and life is but a nightmare. Her twin, Willow, was everything to her and the one that excelled at everything. And her little brother Robbie is a genius. But Mac? Mac was always the odd one out. It is wrong she lived and her twin died. It was wrong of her twin to leave her. And to top it all off her family just moved to a new house, a new city. Nothing is as it should be.

The day after her twin sister kills herself Mac meets Ryan. She gets lost in his house and instead of finding his sister's bed, she finds his. He doesn't kick her out, he understands her pain, and she stays, she sleeps. His presence comforts her and a friendship she doesn't know she needs until she can't imagine herself without forms between the two.

Ryan is popular, a basketball star, a heartthrob.
Tijan wrote an amazing male character for Hate to Love You and I thought then he would be forever my favorite... I guess I was wrong. I will forever love Shay Coleman but he now has to share my heart with Ryan.
Ryan wasn't expecting to find a girl in his bed, he was surprised. But he let her stay, he made her feel welcome. She didn't find out until later why he understood her pain, but he did. His pain was as real as hers. As touching as hers. As heartbreaking as hers. He just had a little longer than her to learn to leave with it...

The secondary characters, as per usual on Tijans books, are just as amazing, as real and easy to love. I know this is a stand alone, but I for one would not mind if one day she decided to write books for the other characters.

I do not remember last time I cried this much for a book, specially since I so seldom do. I feel raw right now. Ryan's Bed deals with suicide, with depression, with high school drama... those can be heavy and difficult topics to get right and/or to write in a respectful way and Tijan succeeded  tremendously.  Suicide is not pretty, is not easy, and it does not end with the person who died. It affects the lives of everyone that loves them, it lingers, it lives long after that person dies. Tijan shows that, she does not romanticize it, she does not make it pretty. She makes it real. And in doing so, she takes us, the readers, into a journey with no return. You will feel Mac's pain in your bones.

The love story that evolves between Ryan and Mac is beautiful. Sure, there was attraction from the very beginning, but they were friends first. He was there for her first. And without knowing, she was there for him. This is a romance novel, with all the hot scenes Tijan writes so well, but it is so much more than that too.
I challenge you to not cry while reading this.
I challenge you not to love this book.