Losing it by Cara Carmack 4/5 Stars 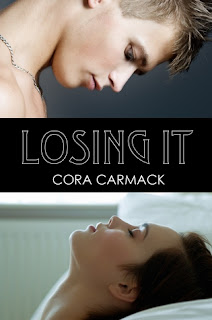 A fun, funny and sweet read!
My first by Cora Carmack but definitely not my last.

Sick of being the only virgin among her friends, Bliss Edwards decides the best way to deal with the problem is to lose it as quickly and simply as possible - a one-night stand. But her plan turns out to be anything but simple when she freaks out and leaves a gorgeous guy alone and naked in her bed with an excuse that no one with half-a-brain would ever believe. And as if that weren't embarrassing enough, when she arrives for her first class of her last college semester, she recognizes her new theater professor. She'd left him naked in her bed about 8 hours earlier.

The book wasn't perfect, but it was close. I finished reading it in the morning and the characters stayed with me the whole day. That for me is a sign of good story.

Our protagonist's name is Bliss -how awesome is that name?-
She is a fun girl that often ends up saying the wrong thing or doing clumsy silly stuff. I smiled at her silliness and easy personality.

Garrick was your typical nice guy. He is however the reason I am giving 4 stars to this book and not 5. I liked him, but as a British person and I can tell you he was not well written as far as backgrounds go. That is literally the only thing that is meant to be exciting and different about him so it should have been done a little better. But as I said, I did like him... he was sweet and kind. He also felt very real with his feelings: he got hurt, got mad, asked forgiveness...

Bliss's friends in the book were interesting too. I loved all her uni crowd and I am pleased to see that the next book focuses on one of her best friend's, Cade. For a little while there I almost wished he would end up with her, he understands and knows her really well.

All in all a great and well written story. It just needed a little better background for Garrick and a better book cover. That guy on the cover looks like a teen not a professor at a university!